Unlike most enigmatic movies that feel manipulatively vague in order to simplistically drum up the audience’s interest with an artificially confounding plot (the mystery often intentionally masks – through superficially bolstering – a throwaway story in a classic example of style over substance), the structure of Buster’s Mal Heart is not only justified by, but also imperative to cinematically conveying the title character’s reconceptualization of reality.

I’ve been tracking some unconventional “bests” of the year – those that the Oscars don’t award – and Buster’s Mal Heart would garner a few nominees: Best opening shot, best opening credits, best closing credits, best use of a pre-existing song (all those hymns!), and best title.

Regarding that last one: since each word of the title can be broken down to elucidate different elements of the movie, it exemplifies the possible depths of interpretation for every moment of such a thoughtfully intricate work of art.

Let’s start with “Mal,” by far the oddest part of the title. Its definition, almost every aspect of which pertains to the themes of the movie: 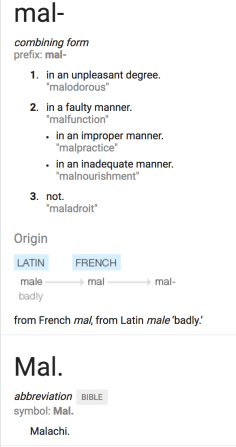 First off, “Malachi” obviously connects to the biblical undercurrents of the story.

Second, “combining form” relates to Buster’s obsession with binaries, particularly the negative aspects of his relationship to the binaries of society and reality.

Malheart would imply he has a bad heart in that it makes him feel like he needs to escape his world (thus resulting in his travails that comprise the plot of the movie), but note the separation of those words. Taken as a combining form, “Mal” connects “Buster’s” and “Heart.” And since Buster is simply the name that society derisively gave to him, the title seems to link his “ill” heart to society’s doing, thus touching upon one of the movie’s central debates: how much is “Buster” at fault as much as the black and white (and thus binary) societal reality that most humans comfortably adopt without questioning? Which is crazier: him seeing the craziness of society, or the rest of us not detecting it and going about our days as blindly happy as ever?