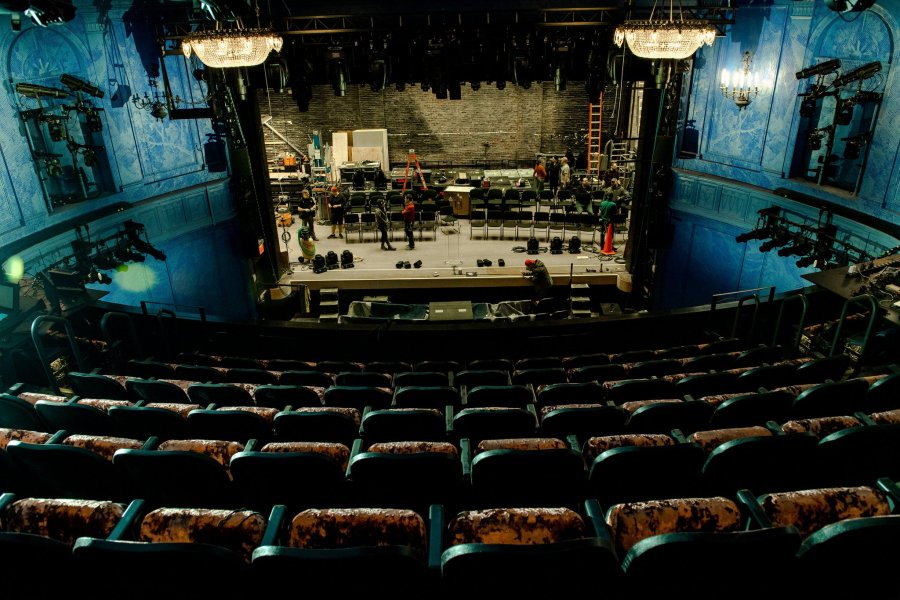 Since I never like to judge anything until experiencing that thing firsthand, I thought twice before publishing this article back in 2017, which bemoans Second Stage’s decision to renovate the perfectly-fine HELEN Hayes Theatre, their new home on Broadway.

Well now that I’ve seen the theatre in person, I’m here to confirm that much of what I wrote stands.

It basically looks like a giant off-Broadway theatre, lacking the storied tradition palpably communicated through the historical architecture of the other houses on the Great White Way.  When visiting a Broadway theatre, I want to feel the years and the ghosts that have lodged themselves into these very same walls that have surrounded audiences for generations. The only noticeable traces of these spectral spirits reside outside on the refurbished 44th Street exterior, what with its newly-uncovered plaque that denotes its original name The Little Theatre, befitting its intimate size. I’m so enamored with the external touchups that a part of me wishes the requisite marquee was smaller to provide all of us with better views of the whole building.

But on the inside, architect David Rockwell seems to have tried to merely suggest the past through an abstract hodgepodge of off-putting weirdness. I never like to prematurely scorn potentially progressive designs (I learned from the fact that most major made-man landmarks were greeted with conservative disdain by their contemporaries), but the celestial chrome-colored seats combined with the weird murals on the walls reek of faux-history, like a tasteless recreation of a Broadway theatre.

Am I alone in missing those ratty red walls? Sure, they may have lacked the grandiose, elegant decor of other theatres, but at least they had authentic character and personality. Even if the theatre truly required a facelift — a rundown interior often hints at greater structural problems in need of fixing — why didn’t they just follow the lead of the recently-reclaimed Hudson Theatre, which, when it opened last season, instantly became one of the most gorgeous theatres on Broadway THAT ACTUALLY FEELS LIKE A BROADWAY THEATRE.

And don’t even get me started on Second Stage liberally dropping the HELEN in various places brandishing the name of the theatre. The powers-that-be claim it was a way to save space, and that the name proudly remains the Helen Hayes Theatre. But if you’re so proud of it, KEEP THIS GRAND DAME OF BROADWAY’S NAME UP IN LIGHTS. There are many Hayes’s in the world, but only one Helen Hayes. Also, that excuse is BUUUUUUUULLSHIIIIIIIIT. Why is it so hard for organizations just to admit that they didn’t anticipate the outrage caused by one of their decisions? It’s simple: acknowledge your brain-fart, own your error, accept the comeuppance, add five measly letters where appropriate, and be done with it.

(For those who’d argue this whole mess doesn’t matter because Second Stage will end up selling the theatre’s naming rights anyways — as they should, because all nonprofits need more money — I’d counter with my continued beffudlement as to why more theatres don’t go with something like “Mastercard’s Helen Hayes Theatre.” I understand the notion that sharing the spotlight diminishes the advertising power of being the only words on a marquee — especially because most of us would keep calling it the Helen Hayes anyways — but the above formulation feels like a healthy compromise between unavoidable economic interests and preserving history. Plus, the possessive apostrophe makes it seem like the corporate entity owns the place, which will surely appease their domineering appetites).

The fact that another nonprofit has moved to Broadway, paving the way for more productions of all-too-rare new plays to make their homes on the Great White Way, is obviously more important than how this famed off-Broadway company treats their new home. But noting where they’ve erred doesn’t take away from that progress, especially when some of these mistakes can be rectified so easily now.