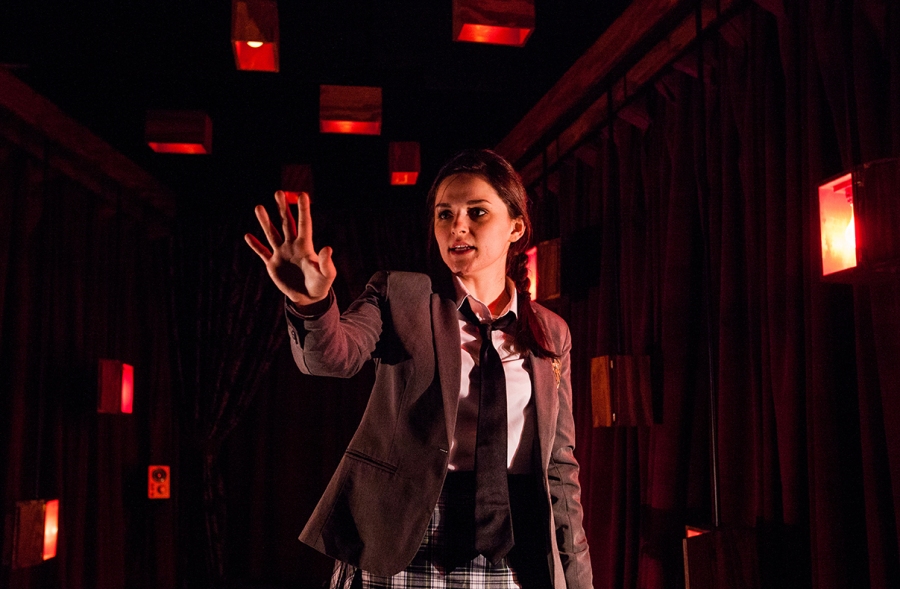 To adequately express the extremity of their ardent adoration for a particular performer, theatergoers often fall back on the following familiar formulation:

“ I would watch [insert name of personally-beloved actor here] read the phonebook.”

Well, the first twenty minutes of Adam Rapp’s The Edge of Our Bodies theatrically literalizes this idea. It consists predominantly of a college student, played by Carolyn Molloy, reading excerpts from her diary about her recent travels and travails. Though such a dramaturgical and performative experiment deserves some commendation for its boldness and daring risk-taking, it crashes up against a predictable problem: humans inherently tune out when someone’s just standing in front of them reading a book out loud. For proof, visit any lecture hall proctored by an uninspired professor on American campuses nationwide; bringing a text to dynamic life requires a performance of the highest magnitude.

Despite that aforementioned commendation, TUTA Theatre’s production at 59E59, helmed by Jacqueline Stone, deserves heavier doses of blame for placing such a burden on a relative newcomer. She may yet climb her way to a top-tier career, but Molloy isn’t yet ready to be plugged into the phonebook formulation above. When she reads from her journal, we don’t feel like we’re in the presence of greatness. Rather, we’re in the presence of an amateur actor reading from a diary. And faced with 90 more minutes suffering through that fate, the audience-wide tune-outs commence (my geriatric comrades-in-yawns were dozing off left, right, and center around me).

After a short time that lasts an eternity, Molloy finally puts down her journal to act out its contents alone (mostly). Unfortunately, she retains the same monotonous line deliveries. Though it doesn’t fly in execution here, the transition from reading to performing is yet another dramaturgical decision with abstract potential. But much like with the rest of the production, inventive dramaturgy is usually DOA when it’s not deeply rooted in the accompanying text. And it very well could be here…but we have no way of knowing after failing to become engaged in the all-important, opening recitation. Without latching onto the themes introduced in the beginning, the audience can’t follow their development over the course of the play.

Which is a shame because, again, Rapp and the design team imbue the play and production with immensely intriguing elements. For instance, I’m a sucker for drastic dramaturgical shifts late in plays that completely re-contextualize its fictional reality. Rapp’s got a doozy of one up his sleeve here, but such flights of theatrical fancy come off as exceedingly superficial without at least traces of foreshadowing, which is basically impossible for us to pick up on when our frontal cortexes are lulling their way to yellow-pages sleep.

Despite the production’s endearingly stylish components, most of the evening’s faults seem to lie at its feet rather than the play’s. And yet, Rapp should shoulder some of this negativity too. He’s an accomplished wordsmith with a clear brand, smoothly juxtaposing the eloquence of his language with its grounded grit (which always cums with copious hints of sexual grinding. The most memorable here: a flowery description of jizz’s smell). But his history of dabbling in becoming a novelist leaves an inappropriate imprint on what should be a more dramatic text. Words that work on a page don’t necessarily sing on stage, especially without a master chanteuse…