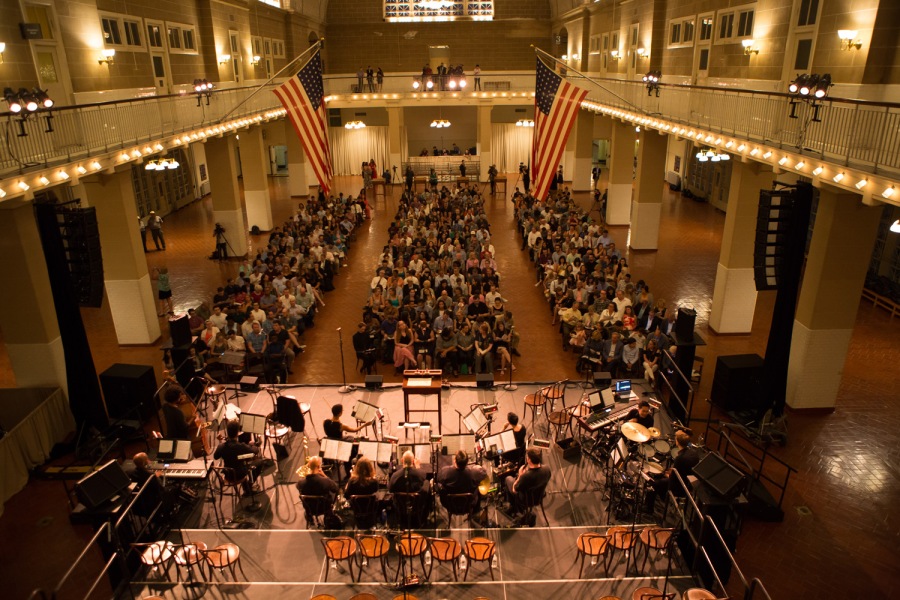 Back in 2016, there was a concert performance of Ragtime inside the Registry Room on Ellis Island.

Anyone familiar with this immigrant-focused musical will understand why that experience must’ve been worth the amount I’ve since kicked myself in the face for somehow not securing tickets to see it.

But I’m not only bringing this up because I’m a masochist; rather, its creative team held “a sound workshop in March to explore the potential use of in-ear monitoring technology for a fully realized future site-specific production of the musical…[They’ll] explore a method of live performance in which the singers, musicians, and sound effects are live-mixed into wireless headphones worn by each audience member.”

“While the workshop is of course focused on material from Ragtime, our team is also excited by the potential applications of this approach to other site-specific musicals in locations where it’s impossible to use traditional sound systems.”

Hold on a second while I quickly pick my brains up off the floor.

The prospect of finally witnessing Ragtime on Ellis Island is exciting enough for this uber-nerd, but the possibilities this technology may open for other theater makers makes me positively giddy with excitement.

One of the many reasons the current immersive theatre craze is so popular is because of its site-specific nature. In an age when consumers can access so many different forms of art from the comfort of their homes, immersive theatre forces them to get off their asses to experience something that RELIES on being experienced firsthand. LIVE theater is inherently different from anything that can be watched on a screen, but that doesn’t mean the form should just rest on its traditional laurels.

More and more productions are leaving behind the comfort of proscenium houses, instead venturing off into new, site-specific places that comment on and thus amplify (pun intended) the show being performed in them. For instance, Brave New World Repertory Theatre staged a translation of The Cherry Orchard this season titled The Plantation, which replaced Chekhov’s Russia with America’s pre-Jim Crow South. To increase the parallels, it was staged in a plantation-esque historical building on New York’s Governor’s Island. The history of the space inevitably colored every component of the experience, in much the same way Ellis Island would for Ragtime.

Choosing a venue that brings an element to the evening not possible to recreate otherwise is one thing, but Ragtime‘s producers seem to understand the potential of dynamic sound designs in these unconventional rooms. Since they can’t fall back on previously-existing sound systems, the designers will need to get creative. But instead of viewing this extra work as a burden, it could in fact further layer the whole shebang by inventively incorporating these technological advances into the very fabric of the show.

Two productions in recent memory come to mind that achieved such an effect, manipulating the interplay between live sound and what the audience hears in their provided headphones: Anne Washburn’s 10 out of 12 at Soho Rep (safe to count on this inimitable downtown venue for most theatre breakthroughs), and Simon McBurney’s The Encounter on Broadway (counting on his experimental company Complicité for the same breakthroughs is another safe bet). It’s no coincidence that they’re two of my favorite theatre memories this decade.

In an age when live theatre is fast becoming a lucrative alternative to our lives lived through screens, theatre makers would be wise to consider all the means at their disposal to create truly unique live experiences.