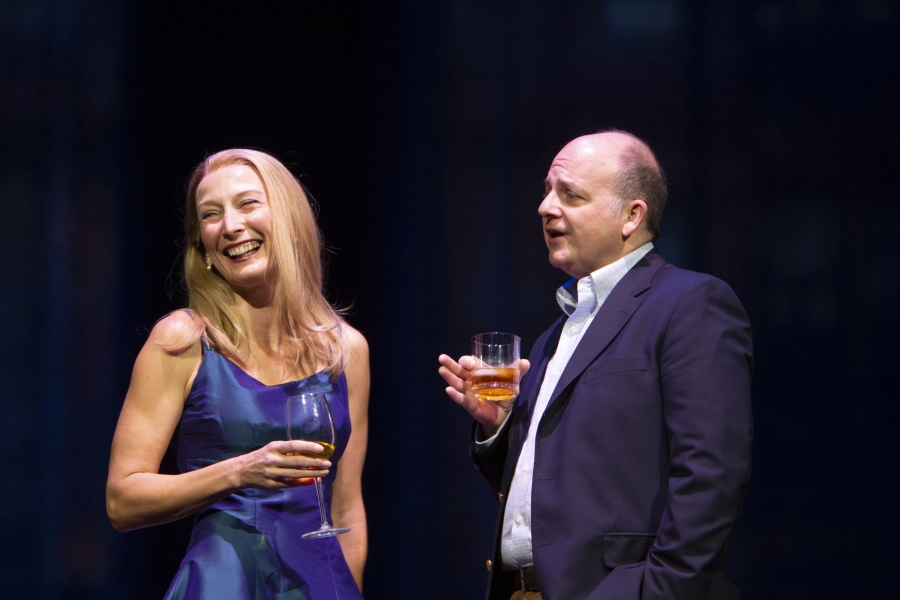 Page-to-stage adaptations can be just as treacherous as the more-chided path from screen to stage.

In Theatre for a New Audience’s world premiere production of Calvin Trillin’s About Alice, based on his 2006 memoir of the same name, an accomplished essayist-turned-playwright struggles to translate the endearing language of his literary voice into an effective theatrical vernacular.

That’s both a synopsis and a criticism.

Through this two-hander between the writer and his titular, deceased wife (both of whom are played by actors: Jeffrey Bean and Carrie Paff, respectively), Trillin fleshes out — literally: Paff gives flesh to her memory — his sketch-like portraitures of her as a minor character that wafted in and out of his autobiographical work for The New Yorker.

The play’s basic dramaturgy simply and simplistically reflects little more than the author’s relationship to his subject; he tells us about her through direct address, and she periodically interjects to keep him and his portrayal of her honest, but he still controls the narrative, because he’s the one wielding the pen. This lack of dramaturgical depth and complexity ultimately results in the whole enterprise feeling slight. She doesn’t come to life here, because she’s not granted a distinct theatrical form, the exact shortcoming he’s purportedly trying to “correct”, as the introductory surtitle projected on the back wall baldy states.

Baldly stating is actually the modus operandi of the entire piece, rarely the most meaningful way to communicate anything on a stage. His words convey their personalities, but lack sufficient present pathos. It’s verbally descriptive without being theatrically illuminating, preferring pithiness over nuance.