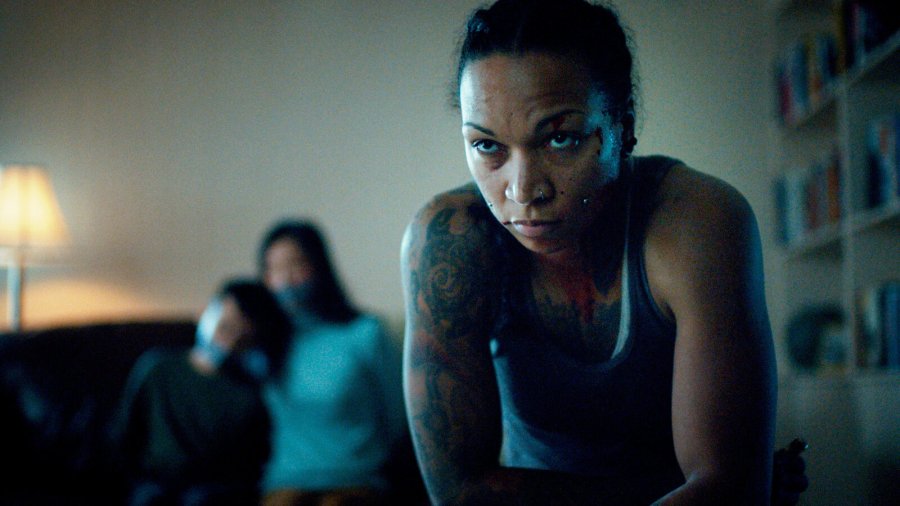 Catch the Fair One mashes together the narrative formulas of two genres to convey the nature of systemic dehumanization.

The title promises a detective procedural, reinforced by the initial set-up: a Native American girl is kidnapped, and her boxer of a sister tries to sleuth out her abductors. But there’s a fallacy in this Hollywood formula: in real life, systems of oppression are designed to chew up and spit out its innocent victims, dehumanizing their identities past the point of identification. They are nothing more than their bodies, and their bodies have one purpose before being discarded. Procedural expectations erroneously prime us to expect a resolution, but how can you locate an individual whose individualism is not recognized by anyone and everyone who might know her whereabouts?

As this realization sets in for the main character, Catch the Fair One transitions into a revenge thriller. A boxer by trade, she’s trained to take down her opponent, or risk death trying. If her primary objective — returning her sister — eludes her, she opts for the next best thing: burn the fucking house down, by killing anyone and everyone even tangentially responsible. At least she can throw a monkey wrench into the systematic mechanisms that swallowed up her kin. In so doing, satiating her bloodlust — a paltry substitute for her sister’s continued life — might save future families from suffering similar fates.

But there’s always a price for attempting to topple the system, and usually, it’s the ultimate price. She doesn’t survive her quest, but she eradicates a few cogs along the way, hopefully mucking up their operation to such a degree that they get their hands on fewer prey.

But has she made a meaningful difference? Or will the system replicate itself elsewhere, making her contributions a mere pothole on the road to hell? Are the powers of evil so systematically entrenched that the powers of good are stuck in a dance of doom with them?

Perhaps, but what else can we do except jump up off the mat again to step back in the ring? The concluding dream sequence seems to suggest this sentiment, which could frame the entire tale as an allegory for Native America’s war against their marauders and ransackers.

The surface meaning of the title speaks to the boxer’s pursuit of catching her “fair” sister. But “fair” could also stand for “justice.” The aforementioned genre formulas position justice as attainable, through retrieval or vengeance. But do either achieve total justice? The fighter acts as the hand of justice, but the justice meted out is incomplete, all while ending her life completely. She sacrifices herself for the greater good, and though she makes the world a slightly better place, the audience should still feel a lack of closure.

Are we locked into systems — be they narrative or oppressive — where the only endgame is a duel to the death?

Quick note: I decided to go with “Native American” here, instead of other alternatives, because that’s what the movie’s press materials use to describe the characters.