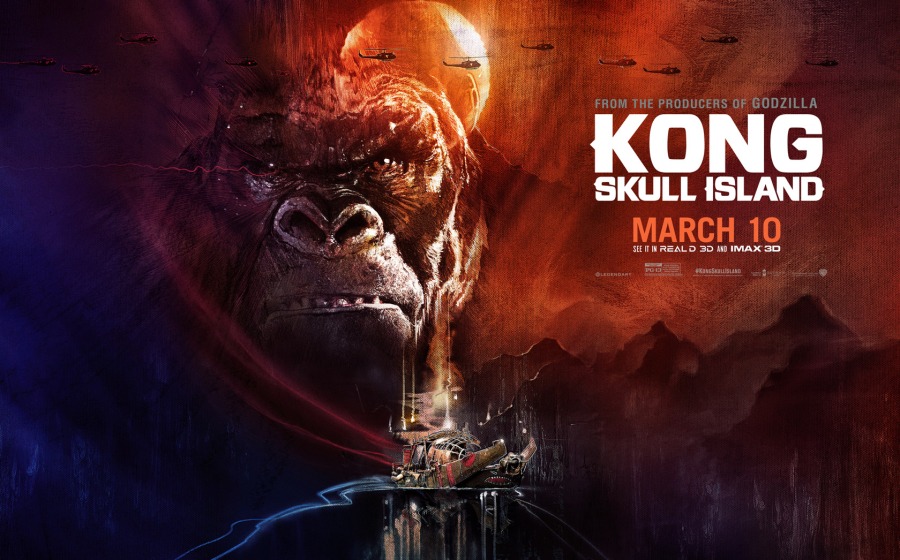 Kong: Skull Island shares traits with both of the last two weekends’ slates of releases: like Get Out two weeks ago, it’s basically the sole offering of interest this weekend; and like last weekend – but unlike Get Out, unfortunately – this lone offering did not offer moviegoers much of a reason to leave their houses to hit the local cinema.

This newest entry in the King Kong franchise actually bears – again, unfortunately – a plethora of fundamental similarities with Logan. On their surfaces, they look to utilize the commercial equity built up by popular characters to green light vastly different takes than their previous incarnations. In an age when studios refuse to sign off on any big budget unless it comes with a safety net in the form of a pre-existing following, such creative spins on already beloved characters may be the only recourse available to blockbuster filmmakers looking to shake up the increasingly stagnant Hollywood formula nowadays.

Unfortunately, these changes in both Logan and Kong: Skull Island prove superficially insufficient. Yes, the former somewhat deviates from the common story types of past superhero material, almost to the point where the SUPERnatural elements only serve to connect to the franchise’s established mythology (not to mention justify the derivative BAD-ASS action (all-caps for sarcasm!)), and honestly could easily be replaced with non-X-Men factors without significantly altering the proceedings. Similarly, this is the first major Kong release that doesn’t attempt to basically retell the original’s story, focusing less on Kong’s widely-known initial interactions with the western world and more on how Kong defends those intrepid explorers in new ways from the other monsters on his home of Skull Island.

Though they may look different in theory, the structures of their screenplays tread far too familiar ground. Sure, Logan may not explicitly revisit Wolverine’s origin AGAIN (though it kind of does by introducing the story of his successor) nor depict a superhero team defending all of humanity in a big battle AGAIN (though it kind of does given the multiple superheroes fighting alongside him AGAIN, and the implications of them losing the fight could be stretched to mean the end of the world AGAIN…can you tell that those billing Logan as new are trying to sell you a bag of shitty goods?), but the narrative consists entirely of progressing as quickly as possible from one plot point to the next; the exclusive purpose of the character development is to progress the story from one action beat to another – a surefire sign that we’re still in superhero territory.

As a result, the characters feel inorganic, and despite the filmmakers undoubtedly banking on the audience’s histories with these characters to forge an emotional connection, it’s nonetheless real hard to care about the most important elements in this seemingly endless series of explosions: the humans grounding the spectacle for us, allowing us not only to see these amazing worlds through their eyes but to FEEL their experiences too. Many have been duped by Mangold’s visual style and the cast’s uniform talent to believe this truly transposes Wolverine to a classic yet fresh (for superheroes) western setting, but without being rooted in actual bodies, the genre mashup feels like nothing more than a paltry gimmick.

The last paragraph can basically be copy-and-pasted to describe Kong: Skull Island as well. It tries to forsake the creatively restricting “remake” shackles of the same story (though not really because it still chronicles a group of people stumbling upon Kong for the first time) to have the freedom to harken back to a somewhat different type of flick that the original only flirts with being: a classic monster vs. monster showdown spectacle. Yet much like Logan, this is only a difference of content, for the actual structure of the screenplay cripplingly conforms to the worst of CGI-centric writing, namely: every component exclusively serves to mindlessly lead from fight to fight. And similar to the predominant downfall of Logan, character-flippant action can often come across as nothing more than a carelessly written video game that no one particularly cares about; there’s a difference between an effective movie and a mindless series of unengaging images merely flashing before the audience’s eyes.

Admittedly, those images are quite eye-catching due to director of photography Larry Fong steeping the cinematography in iconic 1970s Vietnam War film visuals, with the biggest influence undoubtedly belonging to Apocalypse Now (further evidence: check out the poster above). In addition to matching the temporal setting of the picture, the aesthetic also lends unexpected subtextual resonance to this spin on the classic Kong tale story by likening the western world invading Kong’s homeland and trying to conquer without understanding it to America’s treatment of Vietnam during that doomed war.

Yet falling in line with the rest of this shallow affair, the subtext in no way shapes the narrative. Instead of finding ways to deepen it by allowing sociopolitical through-lines to allegorically dictate how the story unfolds, the team of screenwriters abandon any sort of lofty artistic goal in their mind-numbing pursuit of simple entertainment, which they handle with SUCH rote simplicity that it barely registers as entertaining. I’m beginning to sound like a broken record with this, but any project containing more than two writers (FOUR here!) always feels like an artificial studio product as opposed to a vivacious work of art that puts forth some sort of individualized human perspective.

The last scene – played over the credits – epitomizes how little the creators understood or perhaps even cared about the actual story that they were trying to tell. After two hours of the usual big-budget drivel, they end on John C. Reilly’s character emotionally reuniting with his long-lost family. This denouement is of course reminiscent of many other tear-jerking endings – once again, originality ain’t a strong suit of the unimaginative conformity on display throughout – but only one problem: AT NO POINT DID THEY CONVINCE THE AUDIENCE TO CARE ABOUT ANYONE’S PERSONAL LIVES!!! Yet again, Kong: Skull Island tries and fails to successfully cash out by adopting too typical Hollywood norms, but going through the motions without actually thinking them through is a recipe for failure.

Kong’s monster vs. monster and Logan’s western conceits are undoubtedly more novel approaches than those of most franchise fare, but conceits are mere concepts that crucially rely on equally novel – or at the very least not tired – execution to bear their refreshing fruits. Without substantively commenting on these well-known stories by examining them through different sorts of lens, these cannot be labeled as anything besides wastes of times.

P.S. Speaking of lenses, I would be remiss not to celebrate the decision to strike a handful of 70mm prints. Unlike Logan’s thoughtless digital, the filmmakers here hopefully realized that a 70s, Vietnam War homage should of course be seen on film. If only that amount of thought was put into the actual making of the movie…