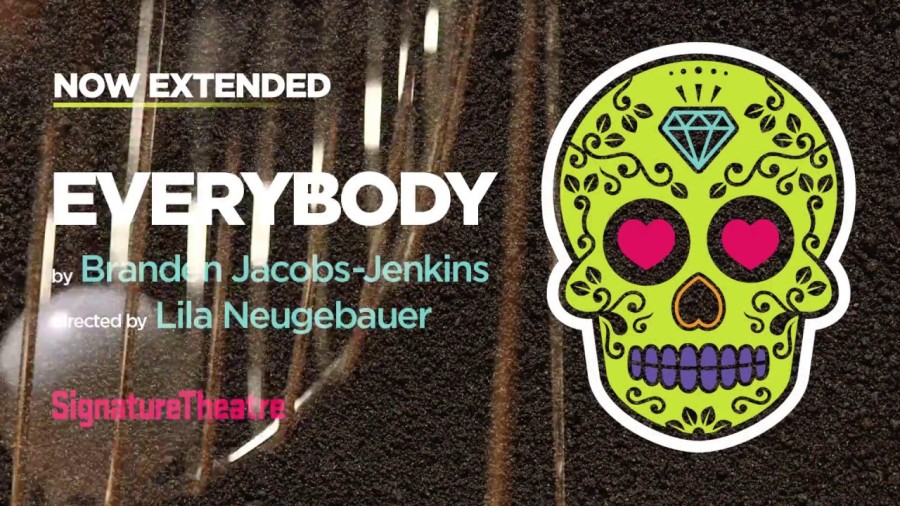 Like much of Branden Jacobs-Jenkins’ dizzyingly thought-provoking work (mostly for better but sometimes for worse; it makes writing about his plays in a focused manner consistently difficult, as the numerous seemingly dichotomous parentheses will attest), his Everybody – a contemporary…revival? adaptation? translation?…of Everyman that played at the Signature Theatre this season – intellectually operates on too many levels to comprehensively process in a solitary viewing. Unlike the declaratory way that such morality plays are often taught, Everybody post-modernly liberates and connects Everyman simultaneously from and to, respectively, its historical roots, allowing both plays to resonate with various audience members in as many different ways as there are different types of people in the crowd.

This idea of humans as differentiated individuals that also bear universal similarities with each other is of course at the heart of – as the title suggests – Everyman. The central conceit of this new iteration calls for a random, onstage lottery near the start of every performance that dictates what roles most of the diverse ensemble plays on any given night, which Jenkins partially utilizes – as explicitly stated by the character tasked with Jenkins’ common role to serve somewhat as the voice of the playwright – as a sort of springboard to tackle the relationship between this archaic yet not necessarily untrue concept and 21st century identity politics (note EveryMAN becomes EveryBODY, which also connects to Jenkins firmly rooting his version in the theatrical, thus BODIES in space – a central tenant of theatre – almost lend meaning to art and thus – since it’s a mirror up to nature – life itself…remember when I mentioned that this production can basically be dissected from an infinite number of angles…yeah, I meant it). In an age where celebrating diversity is such a virtue, what place does a play hold that purportedly shrugs off such differences in the name of delivering universal messages to all individuals?

The answer cuts to the crux of the challenges facing many modern revivals. As audiences’ artistic desires and communal morals continually change, inherently outdated – as in, they were written in and for a different date – plays can feel in desperate need of some tune-ups to avoid anachronistic judgement. Yet at the same time, revivals should always capture what originally made the piece of art great, and cannot drastically alter how it serves as a sort of time capsule of its period. Everybody manages to seamlessly accomplish both, reiterating how a creative reworking can emphasize a play’s timelessness AND persistent timeliness. It retains the elements of Everyman that should be remembered – the foundational story structure, a present recording of near-ancient history, etc. – while recalibrating the play’s themes to comment on today to express how art can truly be for every age.