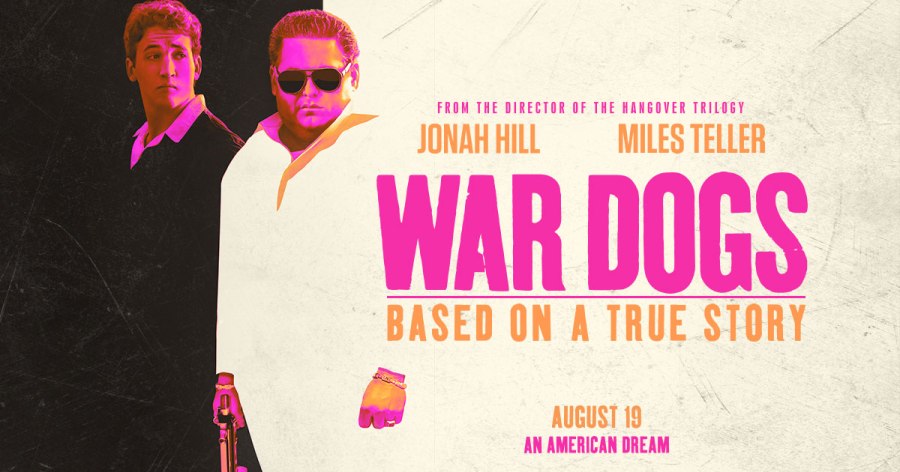 At a time when a former (some would say current) entertainer has become the official Presidential face of one of the most powerful countries in the world, a movie – that most classic of American entertainment – from last year now feels like a harbinger of Donald Trump’s America. Though the script was written well before the batshit craziness otherwise known as the election of 2016, Todd Phillips’ War Dogs offers up perverse depictions of not only Trumpian figures but also the paradoxical aspects of American culture – specifically the mythological tradition of the American Dream – that have allowed for such megalomaniacs of excess to attain success in this country.

According to the film, after the American government was caught selling arms contracts to companies with strong ties to Dick Cheney during the post-9/11 wars on terror, the Bush Administration decided to save face by agreeing to work with smaller companies in the public sphere to arm America’s troops. Due to limited resources, the American government apparently could not properly vet all of these companies, allowing two young, unexperienced stoners from Miami Beach by the names of David Packouz and Efraim Diveroli – played by Jonah Hill and Miles Teller, respectively – to impersonate their way to securing a plethora of these multi-million dollar contracts, which required them to interact with illegal arms dealers on behalf of the American government.

If you’ve seen trailers for the movie, you’ll probably agree that Teller and Hill appear a little miscast; what are the kids from Whiplash and Superbad, respectively, doing in Fallujah?! Though a performance’s ultimate quality obviously cannot be gleaned from the short snippets that trailers provide, it looked like Teller and Hill would be unable to come across like they were doing anything else besides ACTING, and no one in the audience would be able to forget the actors underneath the characters. They seemed almost uncomfortable in their roles, as if they were being jarringly thrust over their heads into the type of story usually reserved for more experienced, full-time action stars.

Well, as is often the case in Todd Phillips’ crass cinematic depictions of modern American life – from The Hangover trilogy to Old School – the joke was on the audience’s expectations, because that’s exactly how both actors are supposed to come across in this surprisingly thought-provoking war comedy about two man-children who find themselves miscast in their self-pursued roles of gunrunners. Teller and Hill must at first feel wrong for their roles because the characters they’re playing were wrong for their adopted vocations. Yet just as Packouz and Diveroli convinced the American government that they were the men for the job, so too do Teller and Hill ultimately win over the audience by imbuing their performances with infectious bravado that still captures the wholly justifiable insecurity underneath. The intentional feeling that these guys aren’t experienced enough for the task at hand conveys one of the most pervasive truths of the film, and of America in general right now: no one has any fucking idea what they’re doing.

This is a classic American story of faking it until you make it. In addition to their financial success, their very identities are founded upon the capitalist notion that an individual is worth whatever they can get paid in a free market, i.e. what you can convince others – perhaps falsely – to pay you. In a twist on one of the founding tenets of the American Dream, they can be whoever they want to be as long they convince others that’s who they are. Who cares if they’re in their mid-20s and have almost no experience in gunrunning – as long as they can persuade the American government to pay them, then they’re successful gunrunners. People can’t actually be whoever they want to be because that would require legitimate skills…but they can definitely exploit the stupidity of others to dupe the world into believing they are whoever they want to be.

You know who’s currently leading one of the most successful fake-it-until-you-make-it campaigns in American history? Donald J-for-Jackass Trump, a man-child who has absolutely no fucking idea what he’s doing; Miles Teller or Jonah Hill are basically just as qualified to run the United States. And yet, since the Donald bafflingly persuaded a large subset of the American public – mostly through fallacies, such as the idea that he’s been a successful businessman even though he’s basically a trust fund baby whose wealth was presented to him on a silver plate simply by being born – that he could be a serious President, he’s become the President (seriously?), regardless of his complete lack of experience or expertise regarding what the job entails. He’s as in over his head regarding such matters as Middle East relations as Teller and Hill literally are in the Middle East.

Yet Trump didn’t just rise to power in a vacuum. War Dogs basically spans the entire length of Bush’s second term, leading right – or should I say left – into Obama’s Presidency. After eight years of progressive liberalism, Trump’s alt-right supporters yearn for a return. Is it such a stretch to imagine them brandishing a quasi-legal firearm while squealing, “I love Dick Cheney’s America,” as Jonah Hill – by far the bigger faker/scumbag of the two – does in the scene that the trailers consistently advertised (signifying how much it epitomizes the whole flick)?

Unfortunately, Trump is by no means a total novelty in the American political landscape. Though there’s of course no precedent as extreme, one scene in particular from War Dogs implies that the former frat star George W. Bush was just as overwhelmed by the responsibilities of his office as Teller and Hill’s current frat bros are by their newfound vocations. The scene features Teller and Hill’s closest interaction with Washington; they attend a meeting in a U.S. government building to convince those in charge of arming the military to award one of their biggest contracts ever to Teller and Hill. Todd Phillips shoots the scene in such a way that he frames Teller and Hill sitting at the meeting table in the foreground, perfectly flanked by two portraits of Bush and Cheney in the background. The symbolic visual connection between Teller/Hill and Bush/Cheney is crystal clear – they are four peas in a pod, men who faked their way to the top by convincing everyone that they possess much more knowledge and experience than they actually do.

And that may be the legacy of the American Dream. It can provide downtrodden folks with the confidence to better their lives, but most in power pervert these noble origins only to better themselves. Trump is by no means the first (and let’s hope he’s not the nuclear last), but he may become the most perverted example in the history of the country. Perverted times call for Todd Phillips’ perverted understanding of America and Americans.