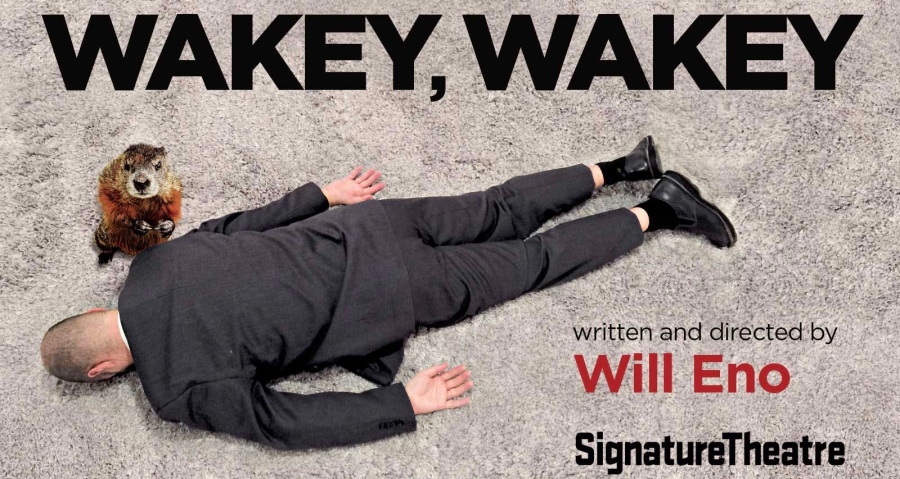 Will Eno is this generation’s Samuel Beckett, isn’t he?

Wakey, Wakey, his latest play that premiered at the Signature Theatre in one of the best productions – featuring one of the best performances – of last season, was the most relatable dramatization of dementia in recent memory.

Or, perhaps that’s just how I interpreted this deliberately-oblique work because I’m currently witnessing a family member suffer through this devastating disease. Eno has the remarkable ability to evoke the profound absurdity – or absurd profundity? – of life that speaks to each audience member differently. This individually-differentiated yet universally-shared communication connects us all in the same way as our fleeting existences.

The text likens a physically-healthy person’s endless pursuit to find the meaning of all life with a dementia victim’s desire to find the most basic meaning in their daily lives. Could the latter be a result of the former’s futility?  How does the mind handle nearing the end without having sufficiently – even if it’s as sufficiently as possible – resolved The Big Questions?

Though Eno often delves into this cosmically-existential terrain, he grounds his writing in the most fundamental questions pervading quotidian life, such as: How can we be happy RIGHT NOW while also not ignoring these essential queries to make sense of our common conclusion?

Every aspect of Eno’s productions – more and more of which he’s been directing lately – comments on these themes, even down to their artwork. Wakey, Wakey’s Playbill design is a subtle yet substantive reversal of The Realistic Joneses’ Broadway art, which featured a dead squirrel in front of a classic white picket fence: 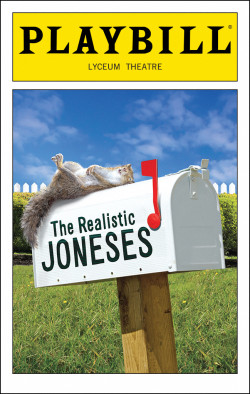 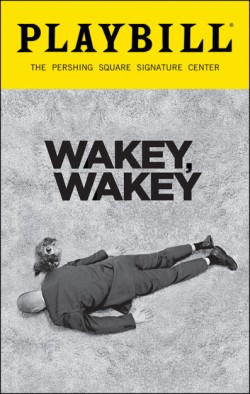 This captures the similarities in themes but differences in approaches between the two plays.

The Realistic Joneses is a profoundly-absurd take on suburbia that imagines how the everyday mores of its residents (symbolized by the fence iconography) would change if they adopted Eno’s obsession with the perpetual imminence of death (symbolized by the deceased squirrel, indicating that death is, like squirrels, all around us). It’s a comedy with tragic elements whose humor stems from laughing AT the characters trying to maintain their normalcy in the face of such inevitable tragedy.

On the other hand, the absurdly-profound Wakey, Wakey is a tragedy with comic elements. It starts with a character reckoning with his guaranteed impending death (symbolized by the dead man), but instead focuses on how to feel joy (symbolized by the living, silly-looking squirrel) despite this looming doom.

Yet with respect to The Realistic Joneses, animals should also make us contemplate death (as should the rest of life, since everything dies), but their happiness – stemming from a lack of understanding of mortality, saving them from wrestling with it – can serve as an equal reminder for everyone to always try to find their own bliss (often derived from man’s best friends) while facing this incomprehensible demise.

Speaking of animals, Eno has the deft ability to dramatically ponder these ponderous questions with a gleeful sense of humor, exhibited in the play’s YouTube animal montage, which – largely due to its hilarious context within the overall somber work – was the single funniest scene of the season.

Finally, I’d be remiss not to mention MICHAEL GODDAMN EMERSON!!! If not for the safe, largely unrecognized confines of the career stability provided by his network television gigs, he’d be considered one of the top actors of his generation. Coincidentally, he and Marin Ireland gave the two best performances of last season, both in (mostly) one-person plays.