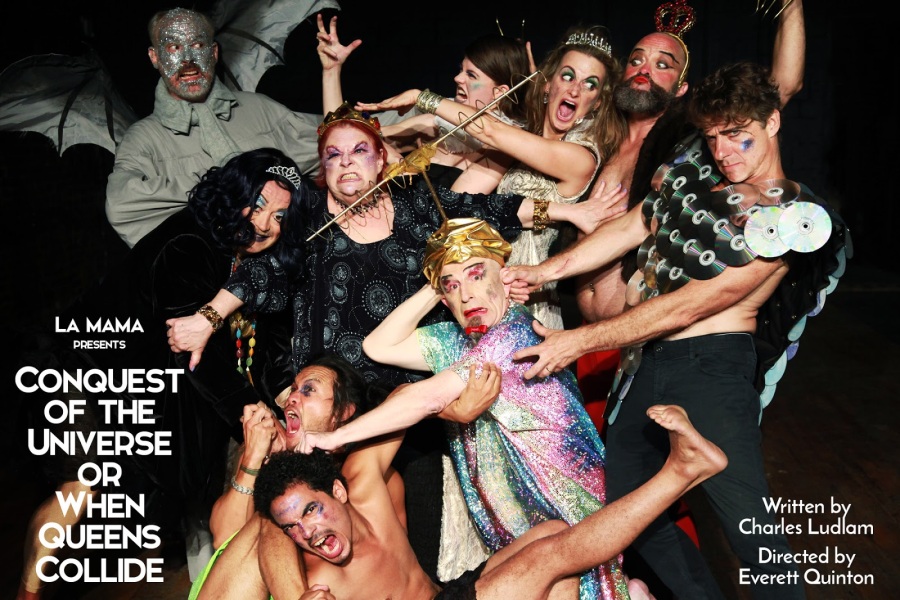 That’s really the most appropriate response to the rampant and relentless inappropriateness of Charles Ludlam’s Conquest of the Universe or When Worlds Collide, currently receiving a raunchier-than-raunch revival directed by Everett Quinton at La Mama. The producers couldn’t have picked a more fitting venue; though this stunningly absurd play premiered 50 years ago, it still feels perfectly at home in this famed house for experimental theatre unlike anything you’ve experienced before.

Except you’ve probably encountered art that both influenced and was influenced by Conquest of the Universe or When Worlds Collide. Its aesthetics can be described as intercourse between Roger Corman’s endearingly cheap sci-fi theatricality, Terry Gilliam’s stylish otherworldliness, and John Waters’ androgynous camp sexuality. This intergalactic tale chronicles the domineering exploits of Tamberlaine as he (what else?) conquers — both on the battlefield and in the bedroom — the lands, women, and men of our Solar System’s 9 planets.

I could go into more details, but the story is a mere vehicle for the NC-17, nay X-rated, nay XXX-rated lunacy deliciously performed by the scenery-chewing, nay scenery-devouring, nay scenery-conquering cast, all of whom are clad in Ramona Ponce’s eye-poppingly imaginative, fluorescent-chrome-colored costumes amidst Robert Savina’s disparately celestial set.

If you thought that sentence, nay paragraph (I’ll stop now — crazy Ludlamism is contagious when done well!) was an overly-stuffed run-on, you ain’t seen nothing yet; Conquest of the Universe or When Worlds Collide is as jam-packed as its title.

Some would probably argue too much so, that it doesn’t sustain its breakneck pace nor maintain the audience’s attention over 100 minutes of nonstop, off-the-wall reveling in degeneracy. In truth, I’m actually not usually a fan of such balls-and-clits-to-the-wall humor, because unrestricted comedy where anything goes tends to be too scatterbrained and frankly easy to elicit legitimate laughs. This brand of amusement predominantly only works in short sketch shows, where trying to be funny again and again and again and again and again and again in every possible way is the name of the thankfully-brief game.

But combatting this trend is an ace up the company’s collective sleeves: shock. How can someone stop paying attention, and actually NOT enjoy themselves, when the next moment might bring something very few have ever seen before on stage?

Plus, there’s actual method behind the madness. Ludlam and Quinton — romantic partners until the former’s tragic demise from AIDs-related complications in the 1980s — were members of an actual movement that developed during La Mama’s heyday at the forefront of theatrical experimentation: Theatre of the Ridiculous, an adjective that both describes AND cannot capture the borderline-indescribable insanity in Conquest of the Universe or When Worlds Collide. More like theatre of the out-of-its-fucking-mind.

Yet even that moniker reveals the highbrow underpinnings of this lower-than-lowbrow crudity. Theatre of the Ridiculous is a play on the names of past prestigious theatrical movements such as Theatre of the Absurd and Theatre of Cruelty. Like them, its surrealist dramaturgy aims to depict the world not factually but truthfully, imagining what life would be like if our real natures came to the fore of our surface existences.

And for Ludlam, the motivation behind all human behavior boils down to two elements: sex and violence. If you’re not the one doing the fucking, then you’re the one getting fucked. The gratuitous-in-every-way sensibilities of Conquest of the Universe or When Worlds Collide — a gratuitously-long and descriptive title with plenty of implied sex and violence in it — may feel, well, gratuitous, but so too would mankind’s whims and flights of fancy if allowed to be as limitless as those on display here. Basically every scene explores a different sort of conquest, with the characters trying to navigate their own survival — and satiate their own debatably gross urges — among this dastardly landscape. It’s a dog-eat-dog world, with plenty of doggy style thrown in.

Conquest of the Universe or When Worlds Collide imagines a world where societal rules are thrown out the window, and everybody is free to behave as their cravings dictate. Though the outcome is obviously ridiculous, it’s not necessarily that far removed from reality. Do I need to remind everybody about the current man-baby in the Oval Office, someone who allows his unchecked ID to determine his actions? Someone who only cares about satisfying his appetite, regardless of the consequences? Someone who’s never been controlled by others, thus has no regard for anyone but himself? Someone who’s perverted the freedom granted by the United States to justify doing whatever the hell he wants, and somehow has been rewarded for doing so?

To Ludlam and Quinton’s credit, the play is aware of how American liberty is a contributing factor to this orgiastic chaos. In the very first scene, Tamberlaine declares himself PRESIDENT of the universe, and later he sits on a throne adorned with a quasi-American flag. Here and there, resonant sociopolitical observations cut through the superficial inanity, such as lines like “Life is a war that never ends” and “Adultery is democracy applied to love.”

Ludlam wasn’t so much prescient as aware of the forces that have long influenced humanity, which writers have been chronicling since the dawn of time. He exhibits an understanding of this through a plethora of references to Shakespeare, from Richard III to especially Hamlet (my favorite: “Alas, poor Urine”). Ludlam is basically Shakespeare on shrooms.

The comparisons between the two run deep. Much like Conquest of the Universe or When Worlds Collide, the Bard also dealt with bloodthirsty and horny royalty trying to take over their worlds. Shakespeare wrote about people utilizing sex and violence to take over the extent of what was known at the time. If he had shared Ludlam’s knowledge of the stratospheres, he too may have taken his characters to space. Since Shakespeare couldn’t actually include real, contemporary people in his plays, he relied on fictionalizing the lives of historical figures to subtly comment on his age. Ludlam’s Tamberlaine also has historical precedents, and Ludlam similarly changes his environment to suit his needs.

Like the best sci-fi, both men knew that removing their ideas from the confines of modernity would facilitate more macro perspectives on the issues that plagued their days, and all days. Since Shakespeare wasn’t allowed to present sex on stage, he avoided this restriction with witty wordplay. Copulating was less of a taboo during Ludlum’s life, so mere wordplay wouldn’t be enough; instead, he decided to show sexual extremities on stage — countering what was then (and now) considered decent — to push the envelope in a Shakespearean way.

Yet these playwrights didn’t just transgress for the mere sake of doing so. Transgression is almost always a a form of resistance. There’s power in theatrical anarchy. Conforming to how a play is supposed to be allows the powers that be to rule. Instead, Ludlam thwarted the rules, allowing everyone in the theatre to celebrate that most dangerous of concepts: freedom.

In the words of the final speech in the play: “Life is but a living dream. He who wakes casts the world aside.” So much of life as we know it is fantasy, rooted in behavior that the collective conscious has agreed is acceptable, barely hiding the true elements simmering underneath. Ludlum was more interested in what’s real, what truly governs humanity, and he brought those to stark life. It may be an uncomfortable turnoff for some, but awaking from the worldly dream of reality can’t help but be eye-opening. Perhaps others would prefer to remain in their dream-like state of reality, but Ludlum allows his audiences to experience the joyous nightmare of truth.

Is all of this ridiculous? Fuck yeah. But not necessarily any more ridiculous than life itself. If you’re looking in the right way, what’s right should feel oh so wrong, and that wrong may actually be too right…