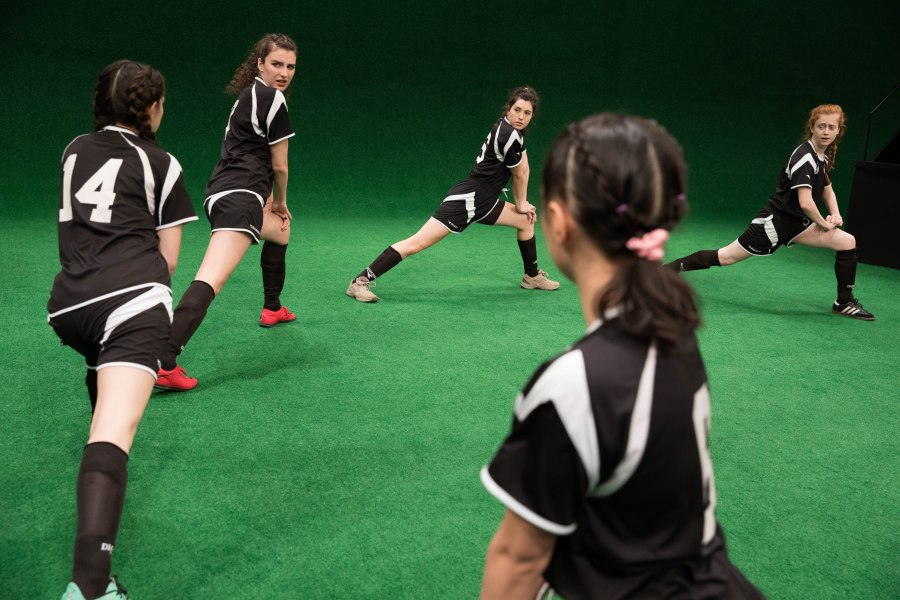 If you’re even remotely tapped into the theatre world, then you’ve already read all the much-deserved praise regarding Lila Neugebauer’s direction of the true-ensemble in Pulitzer Prize finalist Sarah DeLappe’s The Wolves, currently winding down its third (3rd!) production in New York City, this time at Lincoln Center’s off-Broadway Mitzi E. Newhouse Theater. As such, hopefully you won’t fault me for not repeating it here.

I’m happy — and unsurprised — to report that there was nothing lost in translation for the production’s move uptown, which centers around the interactions between a high school girls’ soccer team during their practices. This time, though, I had a newfound appreciation for all involved because I saw one of the play’s many planned regional productions, this one at Hartford’s TheaterWorks.

Lest you think I’m about to devolve into a big-city elitist shitting on out-of-townies, I walked away from that iteration most impressed with Sarah DeLappe; the strength of her writing comes through regardless of the relative talents of those bringing it to life. At the same time, watching other people try to recreate the communal theatrical naturalism of life achieved by Neugebauer and her cast further bolstered the magnitude of their own achievements.

And yet, my sole significant criticism persisted, preventing it from being a GREAT play: Though the depths of its observational insights usually stem from far older writers, the text still  bears the mark of a newcomer trying to figure out a way to touch upon all of the dramatically rich topics she’s ever wanted to air out onstage. As playwrights mature, they come to understand the difference between a good idea for a play and a good idea for THIS play. But since DeLappe may not have known if she’d be afforded another chance to flaunt her theatrical prowess, she can be more than forgiven for committing this slight mistake

Since I attended both of their New York productions in the span of three days, I couldn’t help but notice the similarities between The Wolves and Jocelyn Bioh’s School Girls; Or, The African Mean Girls Play. Much of what I detailed above regarding the former also applies to the latter, both positive — the depths of observational insight; capturing humanity in all its tragicomic glory; deeply-specific yet fluid direction; some of the finest ensemble work you’ll ever see on stage — and negative: a bit thematically unfocused (then again, life isn’t focused). Their surface similarities almost don’t even need explaining: They both depict a group of high school girls.

When the plays are put in conversation with each other, new elements come to fore, enriching the subtext. As the title suggests, and as I’ve previously written, School Girls; Or, The African Mean Girls Play explores the potential influence of western culture on some African countries. Inversely, The Wolves shows through their conversations how detached privileged Americans can be from overseas plights. Though wealth plays a role in both, the School Girls openly talk about their lack of money (some even lie about it), whereas The Wolves largely avoid the subject, both because they don’t even realize their own privilege, and because it’s such a taboo subject in everyday American discourse.

Yet for all their differences, the even more numerous similarities between School Girls and The Wolves create a feeling of global universality that so much art strives for. An enterprising theatre should really stage both plays as a double-bill of full length one-acts. Or, if that’d be commercial suicide since few others share my predilection for butt-numbingly long evenings at the theatre, producing them in rep would do the trick as well. How can I reserve my ticket now?