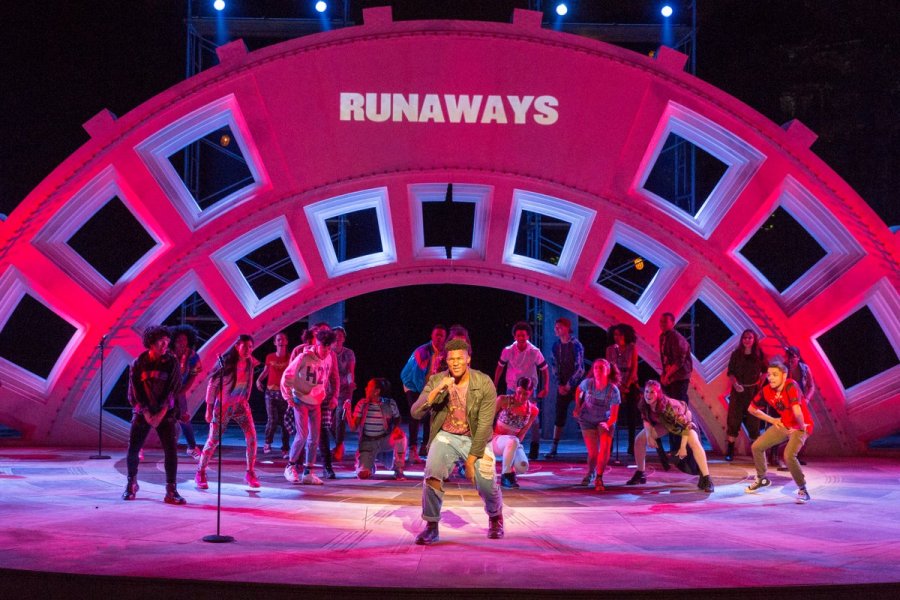 On its surface, Elizabeth Swados’ Runaways seems like the sort of musical that would be a perfect fit for an Encores!-style concert presentation.

But really, all such revues tend to be centered around the musical ingredient that these sorts of preliminary stagings excel at: the score. Given the limited means at their disposals — namely, the lack of proper rehearsal time and bare-bones technical elements — these evenings usually rest on the laurels of their chosen show’s music; building characters and conveying narratives often require more than is possible to achieve within these confined parameters, save for the most talented among us.

Though I’m sure there are kids out there who could make Runaways sing under these difficult conditions, none appeared on the stage of the Delacorte Theatre during the Public Theater’s recent two-night remounting of Encores!’ 2016 revival.

40 years later, Swados’ score is still a doozy, effortlessly comfortable in a range of musical styles that were rarely heard on the Great White Way back in the day. Yet the music isn’t the only historically significant aspect of the material; Runaways helped cement the Public in its infancy as what has become America’s closest approximation to a National Theatre. Very few musicals before, and shockingly only a handful since, have treated the plights of children with as much mature gravitas. Instead of condescendingly looking down upon the young, Swados and Co. viewed kids as just as worthy of becoming fully-dimensional characters with just as much to explore as their adult counterparts.

If only they made as good of actors.

This production served as yet another reminder of the difficulties of relying on children to carry as much dramatic weight. Don’t get me wrong; of course young people can turn in exceptional performances that stand toe-to-toe with older heavyweights. But given their relative inexperience compared to more season veterans,  it takes more work for them to sufficiently blur the line between performance and reality.

Though letting kids play kids not too far removed from their own lives might sound like a fool-proof idea, anyone who’s ever stepped foot on a stage in front of hundreds of judgmental eyeballs knows how hard it is to just play yourself. Certain canned mannerisms tend to come to the fore when under the lights of fiction, which immediately sap any authenticity intrinsically engendered by the intimate association between character and the real-life person underneath the makeup.

For a youth to fully embody a character, a director commonly needs to foster a legitimate connection with them, guiding them to understanding how to access their character’s fictional cores from their own truth. This takes time…the sort of time that Encores! simply cannot afford, both literally and figuratively. With only a few weeks, AT MOST, under their belts, the cast of Runaways should not be faulted for delivering performances that would feel more at home at your local high school than at the Public’s iconic summer home in Central Park. Everything from their line deliveries to their characterizations just scream, literally, amateur, insufficiently scratching past the surface neither of themselves nor their characters.

It might sound like I’m perpetuating the reverse-ageism that Swados attempted to dispel with Runaways, but I actually think I’m agreeing with her general concept. She understood that children, to be taken seriously, must be approached from a radically-different perspective in an equally-differentiated environment; that’s why Runaways still looks and sounds so unconventional. Conversely, it’s short-sighted and almost ignorant to throw kids into the same sort of concert stagings that can best even the best adult actors, and still expect them to bring home the bacon. Veteran actors can succumb to the same problems, but they have more tools in their trained arsenal to overcome such difficulties. Children, on the other hand, are basically set up for failure.

There are, of course, exceptions; last year, Encores Off-Center — a summer offshoot of Encores’ main programming that focuses on musicals off the main stem (even though it played Broadway back in the day, this iteration of Runaways comes courtesy of this relatively-new initiative) — produced a wonderful version of Really Rosie, a piece that  equally revolves around children.

The primary difference: Really Rosie’s shamelessly-proud sensibilities are that of a pop-up book, or a Saturday morning cartoon with outsized personalities intended to instruct everyday moral lessons. It’s a fable, leaning into the inherent surreality of the musical form. The material of course touches upon serious subjects, but in no way does it strive for the same level of resonant introspection as Runaways, the latter of which necessitates more restrained performances to pull off. Hamming it up to a degree that comes naturally to underage performers is essential to Really Rosie’s success, while it cripples Runaways’.

Runaways absolutely deserves another shot in the 21st century. Even though Encores! is dedicated to such revisitations of problematic musicals from the past, they’re clearly not the ideal company to make Runaways a runaway success.  Casting older actors would be a convenient fix, but not granting kids the opportunity to shine in territory dominated by adults would be antithetical to Swados’ mission. These runaways deserve time in the spotlight…as long as they’re given ample time to prepare.