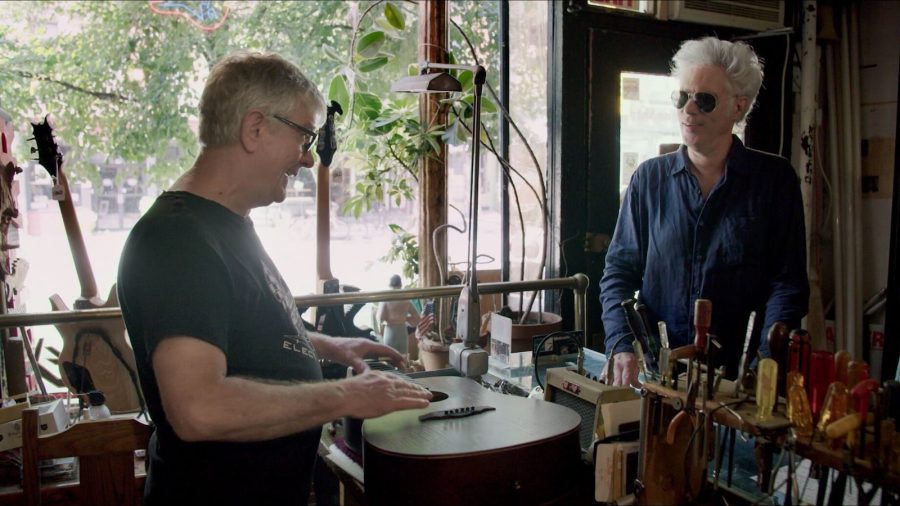 There’s a juxtaposition at the heart of Carmine Street Guitar’s approach that acts as a sort of key to what’s on the documentary’s mind.

The subjects — primarily: Carmine Street Guitars (an old-school, frills-free shop selling the titular instruments on the titular West Village street), Rick Kelly (its longtime owner), Cindy Hulej (his mentee), and an (almost literal) revolving door of rock and roll giants — exhibit a cinéma-vérité-esque disregard of the camera. And yet, everything depicted herein seems to be for the sake of — and facilitated by — the camera. The duration consists of unscripted — or should we call them improvised? — interactions, less conventional documentary interviews, more thematically-related conversations concerning the intersection of identity, character and place, in and between art and life.

These conversations must have been organized by the unacknowledged, but obviously ever-present filmmakers, for their benefit…unless we’re to believe multiple celebs grace the premises EVERY. DAY…which…is next to impossible. Further proof: Jim Jarmusch, one of the interviewees, is also credited as an “instigator” (various parts of the movie are reminiscent of his Coffee and Cigarettes, except no one’s playing a character other than “themselves”…which could require just as much performing).

This contradiction between Carmine Street Guitars‘ handling of truth and artifice, how it mixes fly-on-the-wall realism with manufactured set-ups, is fitting, because the documentary can be interpreted as an elegiac study of under-recognized artistic intermediaries, including its own role as a conduit between its focus and our focus. On another level, the movie’s also a eulogy to handmade and heartfelt counter-culturalism; this ruggedly-endearing DIY spirit persists to this day — AKA, the aforementioned Hulej — but since everyone and everything are products of their eras, the nature of this rebelliousness will morph over time according to the conditions of the period. Carmine Street Guitars’ ethos — and those who occupy and pass through its wall, even if only in the wood of the guitars — was bred in and by a specific sociopolitical climate that has not, will not, cannot be recreated by another.

Which is why documentaries are uniquely positioned to record fading iterations for posterity, however imperfectly.

That’s how Carmine Street Guitars can be a conduit, an intermediary like Carmine Street Guitars, and everything it comes to represent here. The wood, the luthiers, Kelly, Hulej, the filmmakers, and all of the above’s personal stories are often silent, overlooked, and/or flat-out forgotten, but equally-integral parts of the larger artistic narratives near and dear to our hearts.