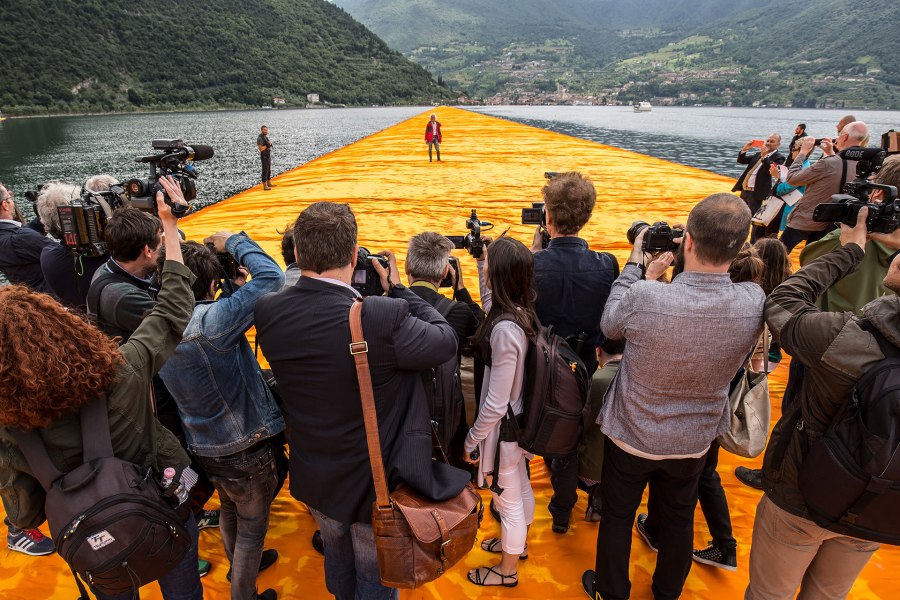 Walking on Water is like a documentary mashup of Christopher Guest meets The Mad Ones, a portrait of an artist-at-work that doubles as a comedy of both manners and errors, pertaining to how the artistic sausage gets communally, hysterically, ridiculously, absurdly, profoundly, dysfunctionally, maddeningly, impossibly, inconceivably, and humanely (or not) made (or not).

The “artist-at-work” here is environmental artist Christo, and the environmental piece he’s working on is The Floating Piers, which is better seen than described.

One of the central questions the documentary deflates pertains to labeling Christo as the primary artist-at-work, since he seems to do little of the actual construction. That task falls upon the shoulders of his hordes of contracted manual laborers, who follow his often nonsensical directions. Walking on Water presents the artistic process as art, or at least the subject of this art, ultimately probing the debate concerning the separation of art and artist; should observing their process color our evaluations of the resulting art, and perhaps change who’s deemed responsible?

The documentary begins at the end of his conception period for The Floating Piers, the part that most would consider the reason he deserves to be showered with accolades, because none of the artistry that springs from his original inspiration would exist without it. And Walking on Water ends with Christo back in an imaginarium phase for his next project; the documentary short-thrifts this incubation stage to indicate its interest in the translation from mind to matter, and the hands of others required to shape it into being.

Christo’s the known name because everything starts with him, yet is he owed the bulk of the credit, when the bulk of Walking on Water‘s runtime is devoted to the tremendous undertaking of bringing that germ to life? Why are these legion of workers left in the unknown dust? Why don’t they warrant just as much attention and praise? If you think they’re more interchangeable than Christo, maybe that’s your capitalistic value system showing?

Then again, without such a documentary, we couldn’t peer behind the curtain, thus it makes sense that the man in front pulling it open is awarded? Walking on Water records for posterity two ephemeral components usually reserved for the dustbins of history: temporary art instillations, and how they come to be.

By focusing on the minute details of this collaboration — and how Christo appears to get in the way more than he paves it — Walking on Water analyzes the nature of idea vs. implementation. Why is the conceptual vision valued over the workforce actually painting the picture? Aren’t all of these factors equally necessary, and to thank? Why are we — including the documentary itself — drawn to Christo (hey, auteur theory!)?

On its surface, the title describes the miracle The Floating Piers offers to traversers. But it’s also a subtle nod at one of the seminal foundations of auteurism, “the author of everything”: Jesus Christ. The holy trinity may sound communal, but the New Testament — and its devotees — harp on one man. Has the western world’s most influential text conditioned/brainwashed — be it overtly, voluntarily, or insidiously — hero worship into the popular consciousness? The dude who walked on water is enshrined, while those who spread his gospel — AKA, why anyone’s familiar with his acts at all — cannot match his heavenly wattage. One man is glorified above all, even though he preached the ideals of collectivism.

Was Jesus’ miracle the product of a solitary blessed individual, or a team effort unrecognized by solo-obsession? Is a manmade miracle an oxymoron in how those terms are commonly defined? And note how the title’s active; Walking on Water, not Walk on Water, which emphasizes the ongoing, perhaps never-ending effort of the artistic process.

Though the documentary’s aware of the substance undergirding what it depicts, it also derives nonstop amusement from its immersion into that feeling that artists nightmare about, of existing on the teetering edge of the chaotic precipice leading to complete collapse. From this enveloping angst comes something beautiful, like how Christo finds peace by trusting another person to cut his eyelashes…by hand…with scissors. Is this beautiful peace predicated upon the aforementioned precipice?

Walking on Water shows the maladies of how the artistic process is usually understood without passing judgement. It neither celebrates nor condemns explicitly, because it’s aware of the thornier issues raised by the flipside to this shared recognition, one at the heart of current discussions regarding art-artist distinctions; who’s culpable for the art’s potentially-damaging ramifications, physical and otherwise? Who’s to blame for the foreseeable problems that wreak havoc from faulty planning? If artists are freed from being the sole controller of their art, then are they freed from needed accountability?