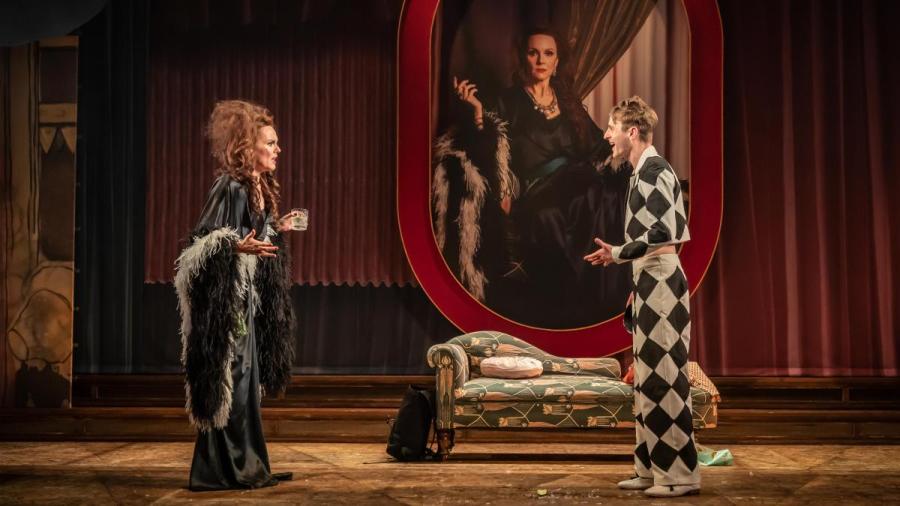 Sometimes, a play’s conversational concept is enough on its own to sustain our intrigue for the entirety of a performance.

The conceits of two recent productions — one a new play, the other a revival of a classic — engage in a running dialogue between the past and the present, bridging the theater of then with the theater of now.

First came Robert O’Hara’s Long Day’s Journey into Night at Audible’s Minetta Lane, which relocated Eugene O’Neill’s text to the Covid age, purely through the aesthetics of the staging. With judicious cuts of era-specific references, but without adding a single word, the revival pulls off a magic trick of temporal multiplicity; by steeping the revival’s design in contemporary times, O’Neill philistines might not even realize that everything spoken was written decades before our latest plague. How does this ancient (by American standards) opus still speak to today, not by altering what’s said, but by placing the words in today?

Mike Bartlett’s Scandaltown, now playing at London’s Lyric Hammersmith Theatre, reverses this calculus. He tasked himself with writing a new Restoration Comedy set in 2022. In doing so, the play is a beat-by beat, comparing-and-contrasting between Restoration Comedy conventions and the conventions of right now.

Prisoners of the moment, submerged in the seemingly insurmountable troubles of their epochs, have a habit of devolving into the belief that their problems are unprecedented; “how can we find a way forward without a roadmap on how to navigate such unparalleled terrain?!” But both of these productions gently (and perhaps not so subtly; not a criticism!) suggest that history always provides imperfect roadmaps. As they say, the more things change…

By merging and intertwining the rearview with the near view, Long Day’s Journey and Scandaltown probe the cyclicality of humanity. What are the similarities and differences, relationships and juxtapositions, between humans of yesteryear and humans in this year? The shows act as theatrical Venn diagrams, asking the audience to constantly and actively analyze the borders of the overlaps, both micro and macro.

But do these mash-up experiments totally work for us — and on us — as individual pieces of art in the vacuum of today? The question kind of misses the point, particularly for Scandaltown.

Or, perhaps the sheer posing of this query IS the point. Artistic dictates radically evolve over time, just like the mores of our respective milieus; how can we expect them to perfectly conform and thus satisfy our generational taste? Instead, how about we throw everything together onto the same stage in front of us, and let’s dissect the intersections, interjections, and deviations; what do they tell us about, well, us?