A shorter version of this post originally appeared on Backstreets.com, which you can read here.

Though most fans have marked Paris as the only European city being treated to indoor concerts, Copenhagen’s Telia Parken Arena definitely fit the bill. With a closed retractable roof and a relatively small, rundown, square-ish configuration reminiscent of a larger version of Baltimore’s Royal Farms Arena, the arena provided a new atmosphere for a European concert: dark, intimate, and stiflingly hot.[1] And yet, none of these adjectives accurately described the concert itself, which was full of light, joyful party anthems to please the masses, with a three hour and 15-minute setlist featuring three and a half tour premieres that at first felt like a fantastic breath of fresh air…until the second half of the show.

After the Band once again walked on stage unaccompanied by any music, “Out in the Street” as the opener perfectly introduced the evening for two reasons: it both immediately established the overwhelmingly joyous, crowd-pleasing vibe of the night, and served as an early indicator that The River would be featured more than at most shows recently, perhaps due to the Band’s (sans Patti) return to an arena setting. Since four of the first five songs played are most closely associated with the original River Tour, Bruce clearly feels more comfortable delving deeper into the record in smaller, indoor venues.[2] In addition to the usual suspects, a rollicking “Cadillac Ranch”[3] made an early appearance, “Point Blank” hauntingly returned, and Bruce pulled off a highlight performance of the tour premiere of the soundchecked outtake “Rendezvous,” the most popular recording of which comes from the original River Tour. 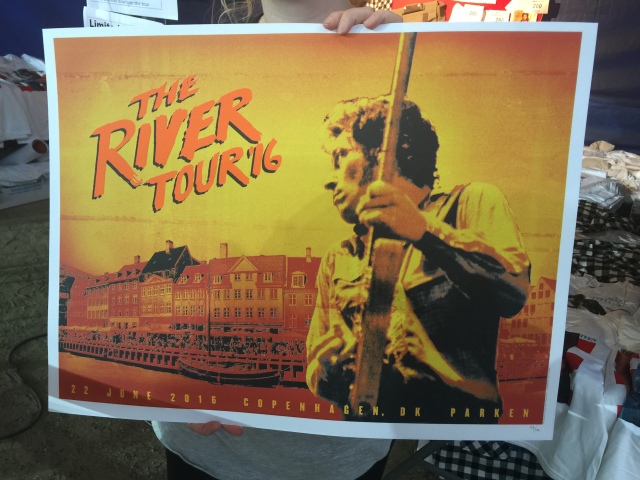 Bruce was in endearingly fast-and-loose spirits, calling upon another sign two songs later for the arguable tour premiere of “Blinded by the Light” – arguable because it was technically played in Brooklyn, but only partially with lead vocals sung by the little girl who had a sign request asking to take the mic. This time, the early gem was given the full band treatment, and – despite Bruce committing a false start on the guitar – it was a relentlessly fun performance, with Bruce needing to repeatedly wipe heat-induced rivers of sweat out of his eyes to keep up with the flood of lyrics.

After “Spirit in the Night” closed out a Greetings from Asbury Park, N.J. two-pack, Bruce brought the crowd back to the 21st century with the tour premiere of the soundchecked Wrecking Ball track “We Take Care of Our Own.”[4] It was a tight, crisp performance, perhaps inspired by the gun control debate currently raging in Bruce’s homeland, back in the news on Wednesday thanks to a House sit-in. Later in the show, a three-pack of songs all featuring gun violence – “Point Blank,” “Murder Incorporated,” and “Atlantic City” – reinforced this connection.

More than that, however, “We Take Care of Our Own” made me realize the breadth of songs from throughout his career that Bruce had already called upon during this opening stretch, from an outtake to an old classic off his first album and now a modern classic from one of his newest records. The man truly has a full careers-worth of exceedingly quality music from which to choose, and he spread the wealth in Copenhagen by playing songs from 11 different albums, not to mention covers.

The final tour premiere of the night has to be one of Bruce’s most well-known songs that his perfectionist side somehow never allowed to make onto an album: “Pink Cadillac,” for a sign that read in pink paint: “Three generations took their pink Cadillac to go dancing in the dark.” “That comes later…” Bruce responded, “…but ‘Pink Cadillac’ might come now.” The crowd roared, and after briefly talking his way through how to play the song – informing the audience the Band hadn’t done so in a while – Bruce launched into a raucous rendition, with the relatively quiet crowd[5] quickly coming to life to sing along, their voices echoing off the walls.[6]

In addition to featuring a wonderful sax solo from Jake, the song also let the lighting team shroud the stage in pink – one of the best parts of the concert, in fact, was finally being able to once again enjoy this team’s brilliant work due to the enhanced darkness that comes with an arena show. Also making a return: the cellphone fireflies of the crowd, both during “The River” and – fittingly, given the name of the song – “I’m on Fire.” 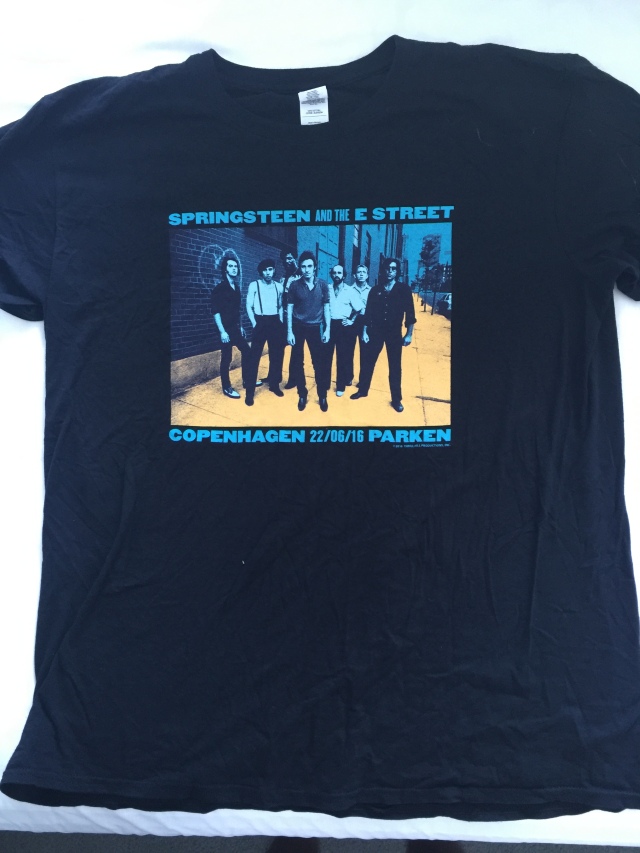 Sadly, the return of this arena atmosphere failed to change the latter half of the setlist, which included the same stadium crowd-pleasers that Bruce has been playing at every show. Unfortunate but true statistic: 15 of the last 16 songs in both Berlin and Copenhagen were the exact same and played in the exact same order – an excessively predictable stretch longer than any of the post-River portions of the setlists that American fans grumbled about during the U.S. leg. Though some have justified this decision by citing how much casual fans seem to love these songs – and they’re almost all very strong, enjoyable tunes that achieve Bruce’s goal of ramping up the show to a kinetic conclusion – the amount of different albums represented in the early half of the setlist served as a reminder of the seemingly endless depth of Bruce’s musical oeuvre; there’s just no way that the likes of “Working on the Highway,” “Darlington County,”[7] and “Waitin’ on a Sunny Day” are his only options that can work up the entirety of the crowd into a familiar frenzy.

Speaking of “Waitin’ on a Sunny Day,” it unexpectedly featured the most surprising moment of the homestretch. Instead of choosing yet another child, Bruce gave the microphone to a passionate fan probably in her mid-20s who had lined up for days to be able to stand in the front row. Simply put, she absolutely rocked the performance, reveling in her lifelong dream of being able to share a stage with the E Street Band, clearly understanding the gravity of the moment in a way that kids very rarely can. She basically blew the roof off of Telia Parken Arena, bringing a gigantic smile seemingly to everyone’s faces, most especially Bruce’s.

Ultimately, her performance served as a reminder of how a small deviation from the nightly script can go such a long way. Hopefully Bruce took note…

P.S. Something else for fans to note: Bruce didn’t end by saying, “We’ll be seeing you,” even though we know for a fact the Band will be returning to Denmark later in the summer – further proof that Bruce is not subtly trying to tell us anything whenever he voices this sentiment…

[1] Stevie even chucked water bottles into the crowd at one point.

[2] A good sign for the many River-deprived Europeans fans hoping Bruce plays the entirety of the record in Paris.

[3] For one of the first times all tour, Bruce didn’t change “Drivin’ alone through the Wisconsin night” to a local reference.

[4] Two songs were soundchecked but not played: “Boom Boom” and “Shackled and Drawn,” the second of which was also soundchecked in Berlin.

[5] Though they of course sang the first verse of “Hungry Heart,” the crowd did not sing along to the chorus at any other point.

[6] Following it up with “You Can Look (But You Better Not Touch)” was a killer two-pack of subtle sex.

[7] Much like it does to me every night, the song actually almost took out Bruce; he stumbled over his own feet during it, but luckily caught himself before tumbling to the ground.