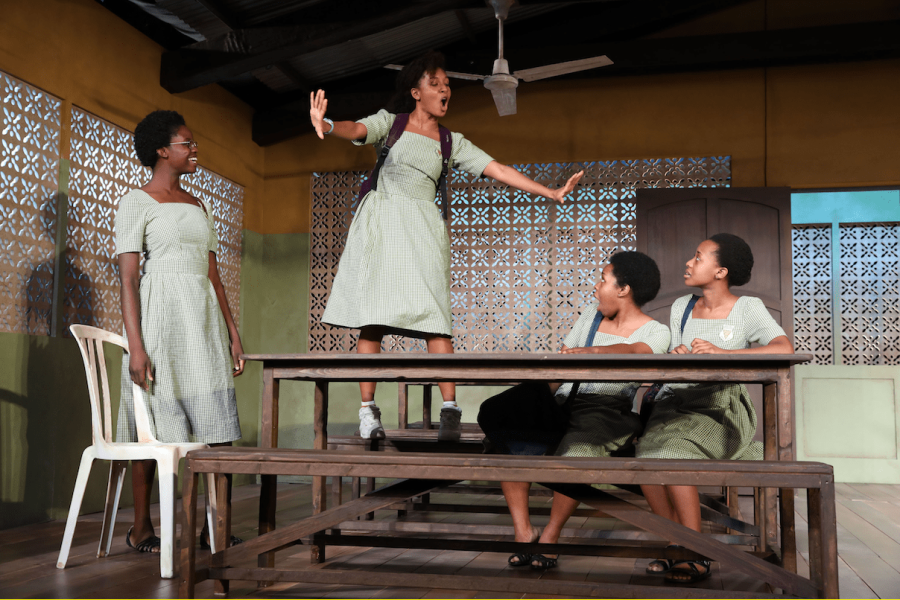 Theatres around the world should produce Jocelyn Bioh’s School Girls; Or, The African Mean Girls Play.

Then again, Rebecca Taichman’s subtly brilliant direction and the otherworldly ensemble work in MCC’s current production may not be replicable (a tour would be incredible for so many reasons, but selfishly I want to see these actors stay perpetually employed in NYC for years to come). All involved tap into the rollercoaster of brimmingly effervescent life that is Bio’s play, which depicts a group of school girls in Ghana preparing for a beauty contest.

As the title suggests, their interactions mirror those in Tina Fey and Lindsay Lohan’s clearly-influential movie. Yet whereas its predominant focus is on realistically presenting — with a bit of heightened exaggeration for dramatic and comedic effect — high school life, School Girls channels these attitudes to somewhat explore the potential impact of western-centric culture on some African countries. Bioh excavates the motivating psychology behind such behavior on a deeper level, without letting the proceedings get too bogged down in an excessively overt focus on thematic and/or subtextual content, which could’ve pedantically prevented its widespread accessibility that makes me want the play to tour everywhere.

Yet since most of its deeper ideas are merely touched upon instead of explicitly mentioned in the play, it may feel a tad slight to some as a result. But much like the title, the play contains depth far beyond the seemingly straightforward surface. The structure of the title looks like an ode to Dr. Strangelove or: How I Learned to Stop Worrying and Love the Bomb, another tragicomedy about American imperialism, both physical and cultural. Titling the play School Girls instead of just The African Mean Girls Play suggests not only how both the play and the characters in it forge their own distinct identities not totally dictated by the western world, but also tells the audience to prepare themselves to be schooled.

Bioh understands that portraying people as realistically — and oh so entertainingly — as possible is a more effective means of communicating ideas than polemically delivering tidy sociopolitical messages; wild entertainment has always been an efficient way of slyly indoctrinating audiences with implicit insights. The dramaturgy might be unremarkable, but in a rip-roaringly paced 75 minutes, School Girls captures the enthusiasm and energy of true humanity, overflowing with equal shares of aching tragedy and slide-splitting comedy.