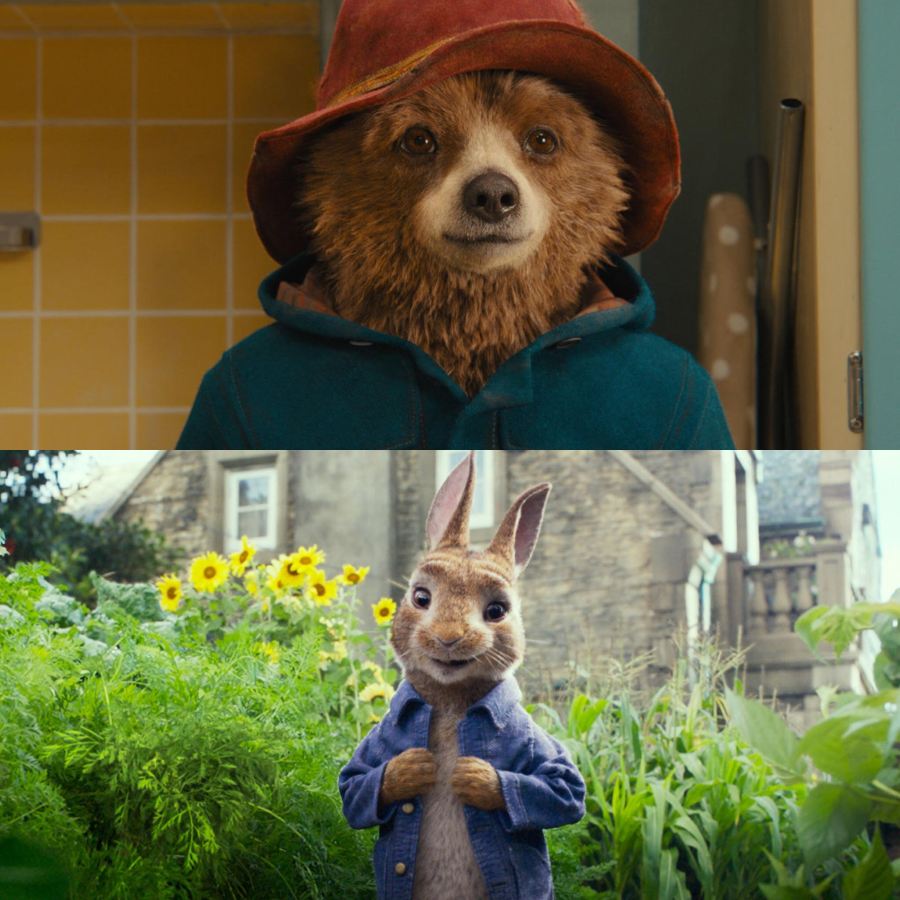 The best reason to see Peter Rabbit is to realize the difficulty of what the similar Paddington series achieves.

The comparisons run deep: both franchises (Paddington‘s on its second, while Peter Rabbit is only starting out) recently released their latest iterations; they’re adaptations of popular British children’s books about animated animals existing in a live-action world; their title characters, both male orphans, learn valuable lessons in London about the transmutable definition of family; Heck, they even share musical interludes, some sung on screen (but why isn’t James Corden as Peter allowed to flex his vocal chords until the credits?!).

Each stars a litany of all-stars from the English isle (and a few Aussies), some appearing in front of the camera while others merely lend their voices to the animals. Though Peter Rabbit’s James Corden, Domhnall Gleeson, Rose Byrne, Daisy Ridley, Margot Robbie, Sam Neill, and Sia (yes, THAT Sia!) are technically less royal than Paddington’s Ben Whishaw, Hugh Bonneville, Sally Hawkins, Imelda Staunton, Michael Gambon, Julie Walters, Jim Broadbent, Peter Capaldi, Matt Lucas, and the delicious villains Nicole Kidman (in the first) and Hugh Grant (in the sequel…also, shoutout to the lesser-known Simon Farnaby for his scene-stealing cameos as a sexually-confused security guard), they’re nevertheless no less adept in general skill.

Except, that is, for the most important member of these ensembles: the lead voice work. Whereas Whishaw seamlessly blends his unassumingly-boyish charm within Paddington’s pervasive whimsy by finding the humanity in an animated bear, Corden fails to be anything more than just James Corden’s voice inside an animated rabbit (perhaps our added familiarity with his everyday late-night antics makes it harder for him to blend in as an oral chameleon).

But it’s tough to know how much blame Corden and the rest of Peter Rabbit‘s cast should shoulder given the quality of the material. Unlike Paddington’s sincere sentimentality derived from fantastical flights of fancy mixed with grounded humanity, Peter Rabbit constantly feels like it’s trying too hard, particularly in the laughter department. The excessively obvious, post-modern, self-aware humor all but winks at the audience — Peter literally does at one point — which can’t match Paddington’s wholesome sense of a wholly self-contained tone.

There’s just something cheap and canned about Peter Rabbit‘s jokes, from the animal humor (a deer transfixed with headlights, a morning rooster so excited the sun came out again yet again that he can’t help but cock-a-doodle-do about it) to the relevant — some, not so much — pop culture references (“that’ll do pig, that’ll do”). Well-timed references that are equally well-executed — usually through surprising novelty — can definitely endear an audience to a piece by making them feel included, but too often they reek of pandering that forsakes artistic integrity. Paddington is referential in a different way: it’s chock full of visual homages to past cinematic eras, and spotting them is part of the fun, as is the sheer act of watching them unfold even if you’re unfamiliar with their antecedents, a far cry from Peter Rabbit’s derivative — and often soullessly transparent in their hammy intent — yucks.

Towards that end, the latter’s cinematography is mostly bland point and shoot, while Paddington’s invitingly-warm style depends on the refreshingly imaginative — yet still creatively-nostalgic and homage-filled — pull of farcical and slapstick physical hijinks, harkening back to the Golden Age of cinematic comedy. Such artistry in itself diminishes the comedically-crippling sense that the humor is intended strictly for the audience, as opposed to making sense within the movie’s created reality.

Only one sequence in Peter Rabbit scales Paddington’s artistic heights: the 2-D animated segment that beautifully — and largely wordlessly — fills in Peter’s backstory (without being too expository) by utilizing the source material’s original, immediately-friendly artwork. For a few fleeting moments, we detect a crucial element sorely lacking in the rest: a personal touch of humanity, stemming largely from its hand-drawn nature.

Paddington proves it’s possible to attain that level of intimacy in the CGI realm, but I wish more animators would take notice of how well it works in Peter Rabbit. 3-D block animation might be THE 21st century cutting edge go-to, but nowadays it’d be waaaaay more refreshing to bring to life classic hand-drawn animation. If the powers-that-be do decide to make Peter Rabbit 2, they’d be wise to rely on this style of animation for the entire shebang. Doing so would properly honor Beatrix Potter’s legacy, sufficiently separate Peter Rabbit from the forgettable hordes of other animated fare, AND lend a human touch to a genre that can so easily feel computer generated, right on down to the writing.

Besides, what else is a movie besides moving pictures?