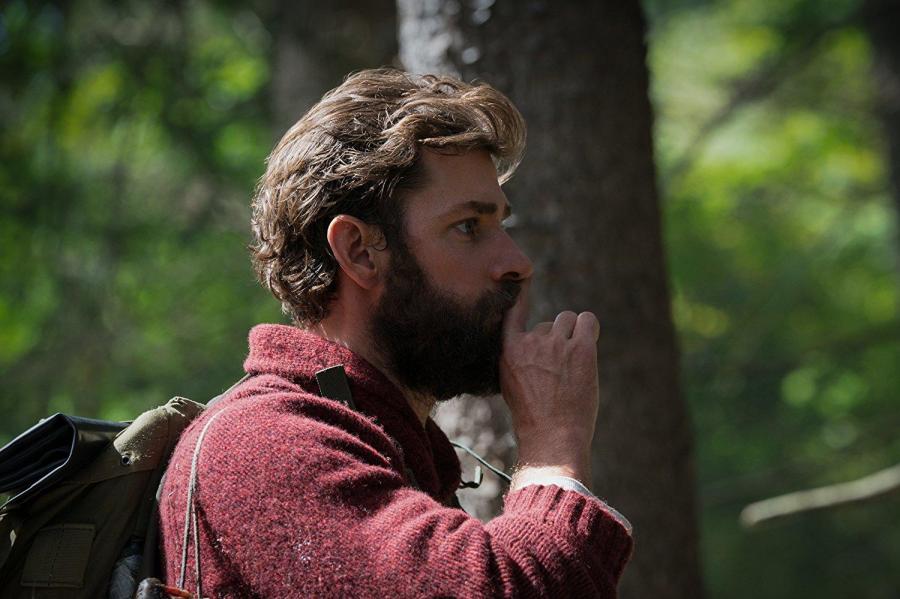 If A Quiet Place was a play, I would say it’s in desperate need of a dramaturg to devise richer dramatic manifestations of the aural concept.

There’s just an obviousness to the approach that feels cheap, exemplified by the often excessively on-the-nose score, which all but yells how to feel at the audience, telegraphing away the resonant subtlety director John Krasinski (otherwise known as Jim from America’s The Office. Otherwise otherwise known as his costar Emily Blunt’s husband) strove to induce by shaking up horror’s familiar formula through manipulating one of the two primary senses through which we engage with film; compensating for its void by overly relying on another component of the auditory experience severely reduces the refreshing novelty.

Instead of thoughtfully utilizing an unconventional soundscape to frightfully reorient the audience’s customary relationship to a horrific situation — which would’ve elevated the scares in the process; we’re always the most scared in unfamiliar circumstances — the sound design ultimately seems more like a simple device in pursuit of straightforwardly-tired thrills.

Though the practice is considered a faux-pas in critical circles, allow me to don my dramaturg hat for a paragraph by providing a concrete, alternative route A Quiet Place could’ve taken to un-pedantically illustrate my point. Beware: spoiler territory ahead.

Instead of revealing the alien threat lurking everywhere in the opening scene, and then detailing their backstory through distractingly-transparent expository newspaper clippings — just one of many eye-roll worthy tropes here — what if Krasinski allowed the audience to stew in the mystery by dropping them into this silent world without context? Questions tend to intrigue more than answers, and part of the fun would’ve been trying to figure out what the hell is going on (answer: absolute hell). Plus, keeping the admittedly-impressive creature design secret could’ve dialed up the chills; it’s an adage by this point that what each audience imagines as their worst nightmare will almost always be more terrifying than an artist’s specific version.

Which relates to the idea that art operating predominantly on the subconscious tends to be more affecting than A Quiet Place’s attempts to communicate as literally and as clearly as possible with the audience. Instead of playing with sound as an all-too-convenient way to send a shiver down the audience’s spine (jump scares everywhere!), it could’ve been a vehicle to explore how altering one sense so radically changes how we interact with the world, mirrored — and thus deepened — by being in conversation with how this differentiated soundscape recontextualizes how the audience interacts with a movie. This interplay between form and content would’ve been more captivating than A Quiet Place’s form being an easy way to simplistically boost the derivative content.

A few quiet (natch) and intimate character moments touch upon this potential substance, but usually as a means to further develop their tritely broad emotional arcs, rarely developing the thematic underbelly. The most effective horror movies are about more than just fear, which requires more distinct arcs populated by characters who actually feel like fully dimensional people, instead of mere pawns in a haunting chess game, which always comes across as more manipulative than artistic.

These subtextual crumbs comprise the few compelling strands of the movie. For example, the implication that humanity’s undying perseverance in the face of impossible odds — symbolized in the many hearing aids Krasinski trials-and-errors to help his deaf daughter — ends up saving the world. Extending that metaphor further, the monsters could be seen as an allegorical comeuppance for the overbearing noise created by the 21st century; there’s just too much man-and-woman-made technological commotion, yet that same tech ends up being the invaders’ downfall.

Instead of exploring these far more interesting thoughts, A Quiet Place opts for superficial terror, which ultimately proves more boring than scary.