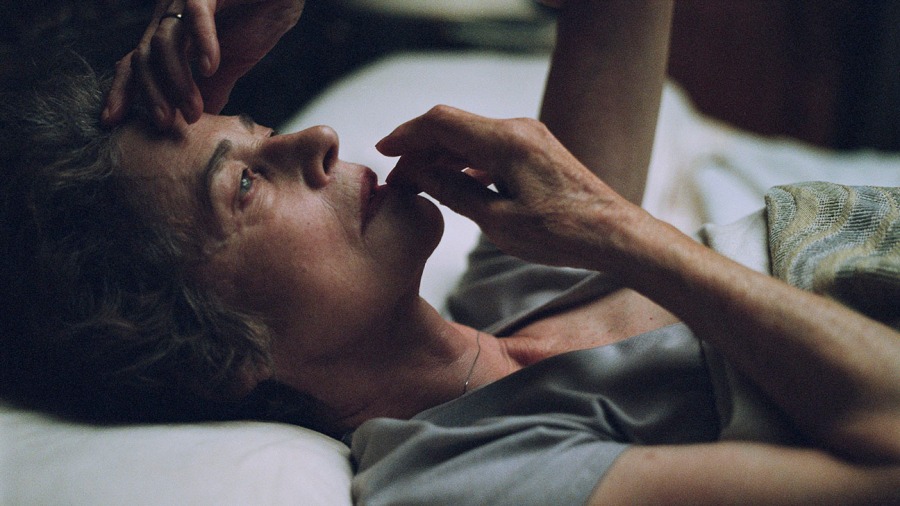 With Hannah, Charlotte Rampling further cements herself as the Queen of wordlessly-anguished loneliness.

Minimalistically utilizing the full extent of her resonantly-nuanced physicality — particularly through every meticulously-observed twitch and flourish of the emotional canvass that is her face — she anchors this 90-minute expressive ballet of meaningful framing, shot composition, gestures, imagery, and of course acting, all accompanied by a sparse soundscape whose noticeably-artificial mixing emphasizes certain real-world effects that in some way comment on the proceedings. It’s a semiotic puzzle for the audience to unpack and then project their own meaning onto, with a stripped-to-the-bone mood that lulls the viewer into its own mysterious rhythm; only by becoming lost in it does the full picture come into view.

Its austere, ardent minimalism can almost seem overindulgent in its under-indulgence; for much of the duration, the focus is on seemingly everyday events that, taken together, present a slice of life that could lead many to ask for more slices (or, they’d at the very least question if the provided slices add up to sufficient sustenance for a full cinematic meal). But that almost feels like the point.

Rampling plays a woman tangentially associated with some sort of crime her husband may or may not have committed. The actual transgression acts as a red herring; if the movie wanted you know what he’s accused of doing, it would’ve told you explicitly. By keeping it so abstract, Rampling’s arc adopts universal dimensions, turning her into a sort of Everywoman, representing anyone who’s found themselves implicated in a mistake they may not have personally committed, but responsibility for it partially falls on their shoulders.

At a time when the social discourse of the Zeitgeist (at least in liberal circles, the sort that’d be willing to watch a “90-minute expressive ballet”) is debating the limits of how much we are responsible for the problems of others — be they in our family, communities, countries, or even species — the hypnotic, mesmerizing mis-en-scene becomes a sort of exploration of the everyday toll exacted by social ostracization.