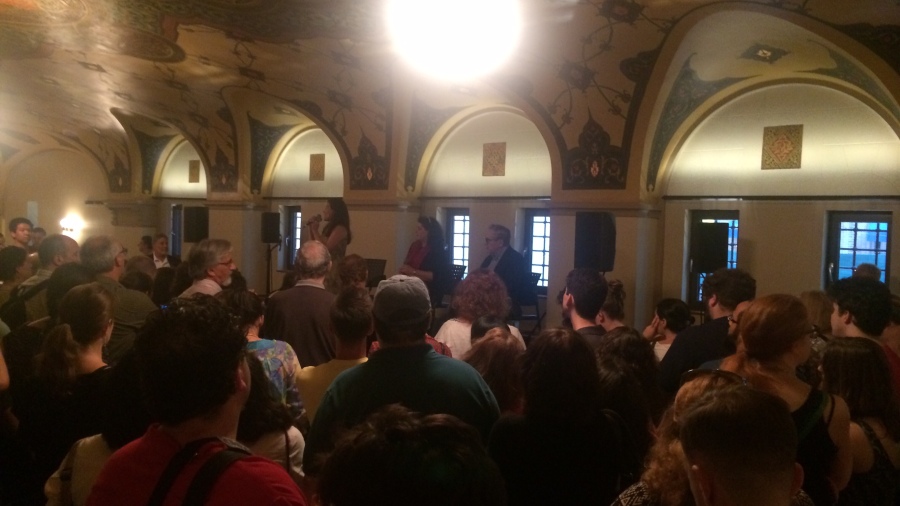 Leave it to The Civilians to create the greatest program note…ever?

Encores! always provides informative overviews in the glorified Playbills for the shows the company digs up. For Songs for a New World, the first production of the organization’s Off-Center summer season, in addition to including a conventional —though still appreciated — article summarizing the history of Jason Robert Brown’s early cult hit (all Playbills should offer patrons similar educations about what they’re seeing), Encores! commissioned The Civilians, a self-labeled investigative theatre troupe, to interview the major players involved with the original production, in addition to others that found their way into the material’s orbit over the years.

The catch: The Civilians’ team of composers set all of their answers to music, changing nary a word. Through a handful of songs by said composers and a conventional book by EllaRose Chary and Jay Stull, the resulting show — a 30-minute docu-musical titled Lucky in that Way — chronicles Songs for a New World’s life, from conception to now; everything spoken and sung from the makeshift stage originated as quotes from these interviews, rearranged and mixed together to relay the same narrative that could be more easily, but less effectively, told in a regular article.

Much more than just a conceit, the brilliance of this approach lies in how Lucky in that Way reflects the styles and themes not only of Songs for a New World, but of all Jason Robert Brown’s inimitable oeuvre. Capturing his penchant for pared-down spectacles, only five singers — Sam Bolen, Ronald Peet, Pearl Rhein, Christina Sajous, and Joanna Schubert — bring to life many more interviewees (in much the same way Songs for a New World’s four actors switch in and out of many more characters; needless to write, Lucky in that Way’s story is much more focused). The sole pianist, the lone musical accompaniment, connects to Brown’s signature piano sound, and the totally new songs are just as introspectively and emotionally character-driven as JRB’s best.

Overall, Lucky in that Way channels the aspects of Brown’s scores that have spoken to aspiring thespians since he broke onto the scene with Songs for a New World, specifically their youthful enthusiasm, the blind optimism needed to believe the insurmountable hurdles they’re facing can be cleared. Since the four actors, though they have their go-to characters, freely voice everyone interviewed, transcending race and gender, Lucky in that Way emphasizes how deeply musicals can reflect universal truths for people from all walks of life. It’s firmly rooted in the lineage of past gems about this very subject, such as Merrily We Roll Along and A Chorus Line.

The show serves as an emotionally-uplifting (good writers don’t need a full-length runtime to wrench the heart, but it’s no easy feat) reminder that the story behind the show’s story can be just as worthy of a show as what’s on stage. In fact, this true-life story, and all its contagious energy, almost inherently seeps into the final product, which is all about wonderfully-naive dreamers striving to live the lives they always imagined. Lucky in that Way taps into this musical harmony of collaboration that begins before anyone has even walked onstage. These disparate souls aligned through this project, like the unity of impeccable choreography; the daily dance of life in the arts. And it all started with a song, like the songs comprising this breathtaking half-hour.

The Civilians will be creating similar showcases for the rest of Encores!’ Off-Center season, setting to song interviews with everyone who made these new productions possible. This series of performances is titled The Lobby Project, because they’re presented in City Center’s ornately-beautiful (like the rest of this majestic venue) Grand Tier Lobby on the second floor, an hour before the curtain goes up on the main event downstairs. Standing for 30 minutes might scare some away, but I’m all about alternative performance spaces, and I also welcome any excuse to check out more of City Center’s architectural opulence.

The Civilians were no doubt invited because of Michael Friedman’s involvement with Encores! Off-Center, as a way to honor his legacy. It’s not nepotism; lending them a platform reinforces how much the theatre community lost with his passing by exemplifying how their radical methodology — which Friedman helped develop — will be awing audiences for generations to come, by shaping the most memorable musical tributes to musical theatre. You couldn’t ask for a better record of the melody flowing through all of us who dedicate our lives to this art form we love so much.

But don’t take my word for it. The Civilians have done the lord’s work by recording Lucky in that Way. Give it a listen here: