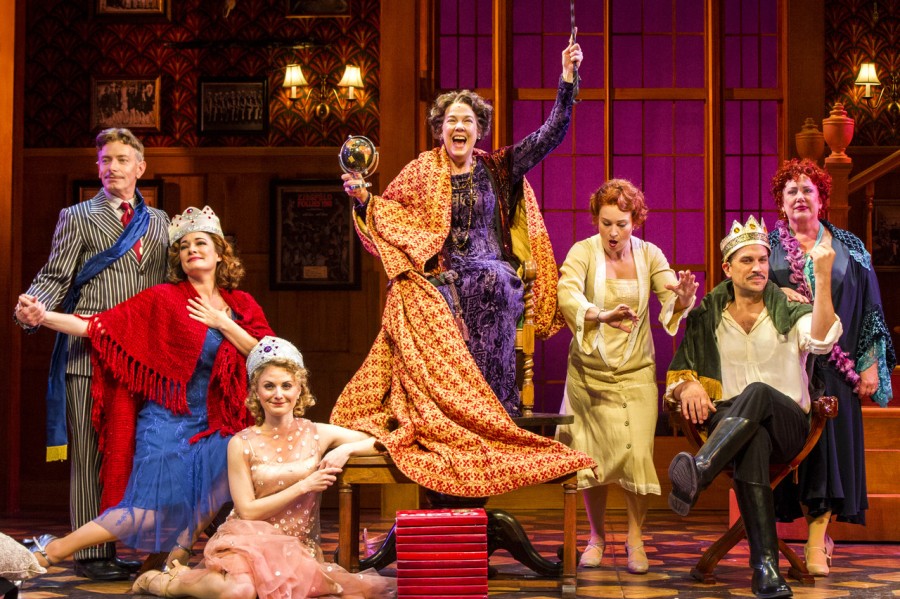 I want to see Kathleen Marshall’s The Royal Family of Broadway.

Or basically anyone’s who has the requisite flair for the theatrical that it takes to capture the enduring luster of the Cavendish clan, George S. Kaufman and Edna Ferber’s fictionalized versions of the factual Barrymore family — the titular Royal Family of Broadway — that they introduced to the world, to a rapturous reception that has continued through its Tony-nominated revival in 2009 (R.I.P. Jan Maxwell), in their 1927 play The Royal Family.

Though a musical adaptation of course doesn’t need to match the tone of the source material, the production of The Royal Family of Broadway (because of course each component of a musical, even its title, must over-explain everything) at Massachusetts’  Barrington Stage Company clearly yearns to revive the aesthetic style of the Golden Age of Broadway (which has never really gone out of fashion thanks to the main stem’s obsession with its own nostalgia).

But despite their indisputable resumes, director John Rando and composer William Finn aren’t up to the task of channeling this indelible spirit, of tapping into the magic of what’s made the form, ahem, sing since the Barrymores (and Kaufman and Ferber’s onstage doubles) last sashayed down the Great White Way. Despite futile efforts to harken back to this glorified era, neither the former’s direction nor the latter’s score boast the pomp and pizazz, the glitz and glam they’re palpably straining to achieve. Perhaps the limited confines of the Barrington’s stage tied Rando’s jazz hands, but his direction for the similarly-retro The Sting at New Jersey’s Paper Mill Playhouse earlier this year also lacked the necessary verve to ignite kinetic musical energy (Joshua Bergasse’s muddled, uninspired, and, again, potentially spatially-hamstrung choreography doesn’t help).

But I’m not sure even the best director could’ve sufficiently elevated William Finn’s work. A musical’s success tends to be rooted in, what else, its music, and Finn doesn’t manage to expand his customarily-intimate sound — popularized in such claim-to-fames as his Tony-nominated The 25th Annual Putnam County Spelling Bee and his Tony-winning Falsettos — to the size of soaring show-tunes. He goes through the motions of suggesting archetypal numbers from the time period, but they land with a flat thud, never cementing a consistently solid sonic identity.

Again, thwarting expectations by excavating the interiority of the Cavendish’s lavish exteriors could’ve been a fruitful approach. But there’s just inferior conformity here, with lackluster coherence between the score and the subject. Where there should’ve been meaningful conversation between the two is now just an apathetic shrug, a far-cry from the emphatic huzzah that the whole show basically celebrates; The Royal Family of Broadway‘s depiction of the antic and manic lives of the Cavendishes is basically a love letter to old-timey traditionalism, with none of that Hollywood sleekness. But pastiches are nothing without at the very least competent imitations.

As with Spelling Bee, Rachel Sheinkin assumes book-writing duties, thus she’s responsible for the mixed-bag of a text. Some of her scenes match — or is it mooches? — the pathos of the original play…but perhaps this praise should be showered upon the ensemble of musical theatre favorites — including Harriet Harris, Will Swenson, Laura Michelle Kelly, and Arnie Burton, just to name a few — all of whom turn in performances ready for the bright lights of the big city; if only what they’re singing and doing matched their preparedness. Too often, Sheinkin can’t figure out how to seamlessly build into, and thus justify, Finn’s songs; the resulting clumsiness is a product of awkward randomness.

Budgetary concessions can of course be forgiven on the road; expecting Broadway-caliber design simply because of a show’s Broadway aspirations is unfair, and often unfeasible. As such, Alexander Dodge’s sets, Alejo Vietti’s costumes, the tepid volume of the minuscule orchestra — heck, even the size of the chorus — understandably cannot evoke the expected razzle-dazzle, which is in no way an indictment of those respective departments’ contributions. With glow-ups afforded by Broadway budgets — think of David Rockwell’s jam-packed set from the most recent Broadway revival of the similarly-kooky, similar-familial, similarly-co-written-by-George-S.-Kaufman You Can’t Take It With You — they probably wouldn’t feel out of place on Broadway.

And that might be where most involved with this disappointing affair believe such a title, and the names attached, belong: on Broadway. The problem: The Royal Family of Broadway, at least in its current incarnation, is basically DOA.