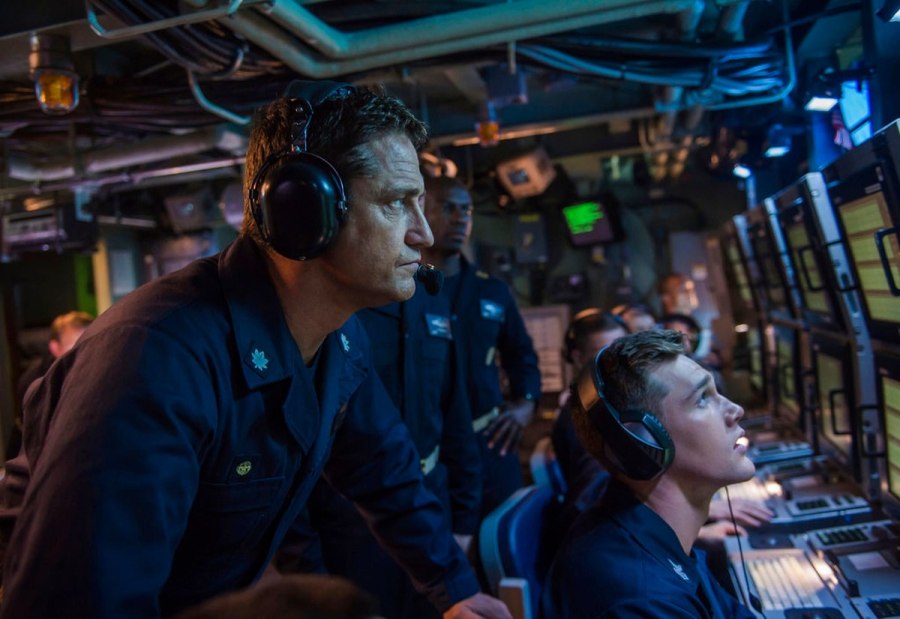 Given renewed tensions between America and Russia, I’ve been waiting for the inevitable revival of the Cold War thrillers that dominated multiplexes throughout the latter half of the 20th century.

And what better way to start than with a nostalgic stroll down B-movie lane, specifically to the realm of Tom Clancy?!

If only this jaunt was a lot better than Hunter Killer…or, you know, actually good. As much as it tries to look the part, any of its potentially-redeemable throwbacks are immediately squandered by the shoddiest of execution, starting before it even begins:

Hunter Killer, though ostensibly another name for ARMED AND DANGEROUS SUBMARINES!!!, is nonetheless a classic straight-to-video title. But how are you gonna have submarines and not take advantage of easily-effective underwater claustrophobia?!

Instead, we’re treated to typical procedural nonsense, sorry I mean bullshit, sorry I mean a plot-fueled narrative. In usual Clancy fancy, it seemingly pulls back the (iron) curtain on the convoluted governmental procedures of international, militaristic operations overseas, communicated through caricature-filled human dramas. The result, especially when so clunkily written, drowns in expository gobbledegook. Though Clancy’s renowned for his complicated plotting, by no means is naturalistic dialogue his particular forte. And that’s fine; often the stylish mis-en-scene immerses us in his yarns to such a degree that we can’t help but be taken along on their rides.

And yet, there’s nothing immersive here. The editing has no feel for the visceral nor the kinetic. There’s no pace to the subpar, amateur filmmaking, eliciting no tension nor suspense, with a deadly dearth of the visual panache that marks the  most memorable entries of the genre. Even the pulsating score, whose pulse pulsates ever more in pulsating scenes, cannot compare to craftsmanship legitimately pulsing with the pulse of pulsation.

How about the immediately-dated visual effects, another standard of these flicks; let’s call the CGI DOA: dated-on-arrival. I actually dug the sets with obvious green screen backdrops…but splicing in digitally-unsmoothed archival footage only enhances the artifice in juxtaposition.

Another giveaway we’re in the land of the over-the-top: Gary Oldman! Before his recent  Oscar heel-turn (I jest!), he was a mainstay in such spectacles, cementing his reputation as a delectable character actor known for maliciously outsized, and eccentrically-performative, villains. Here, he’s criminally underused in a glorified cameo.

At least Hunter Killer nails the excessive length, another genre staple, and the easiest to get right simply by going wrong.

The worst part: we can’t even laugh at such vanilla. Clancy spectacles can be the ultimate delightmares, but Hunter Killer — despite the awesomely-absurd name — isn’t exaggerated enough to be ridiculous, and thus capable of being enjoyably and amusingly ridiculed. Has there ever been a satire of the Clancy aesthetic? Such self-seriousness is always so ripe for spoofing.

I appreciate Hunter Killer receiving a wider release than the usual paths for these B-affairs. Unfortunately, its DOA — dead on arrival, this time — quality is more worthy of the fates of most of its uncinematic, cinematic ilk: the hellscape that is the lost void of the undistinguished VOD.