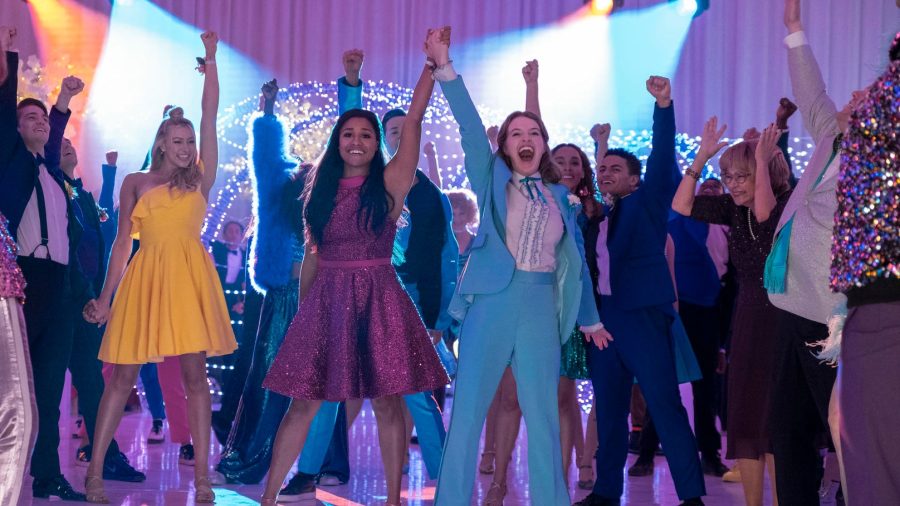 Allow me — and The Prom — to reintroduce a formal concept that neither one of us first introduced to the world: the Act One Fake-Out Anthem.

Musical theater is littered with these sorts of archetypal songs, each of which connects their placement in the show with the dramatic goal to be achieved at that point in the story, like so:

So what the fuck’s an Act-One Fake-Out Anthem?

In short, it’s a rousing ballad that, when initially heard right before intermission, could lead unsuspecting audiences to believe the show’s about to end. But anyone who knows there’s still another act should listen to the song a bit suspiciously; it might sound like a resolution, but the song — and the characters singing it — must be missing SOMETHING that will prove to be the problem lending Act 2 its drama, and usually the closing song encapsulates the epiphanies that the Act One closer fails to see.

For a recent example, we need only consult Netfux’s just-released…The Prom?! That’s right, even the seemingly-fluffiest of tuners can still conform to my brand of academic treatises.

On first go-around, or if heard out of context, “Tonight Belongs to You” sounds like the type of culminating pop spectacle that big finishes are made of. The crux of the show’s predominant issue revolves around attending…wait for it…the prom!, and it sure sounds like they’re celebrating their newfound, hard-won ability to attend…yep, you guessed..the prom! All obstacles overcome, the good guys and gals have won, cue the happy ending, let’s dance off into the sunset together!

All of that is to come, but it needs to be a bit harder-won first, in the second act.

You see, the hurdle that the bounciness of “Tonight Belongs to You” overlooks is right there in the name; tonight belongs to YOU, not US. The progressive protagonists sing the title to the prom-goer to be, while the regressive elements actually organizing…what else…the prom! sing “tonight belongs to US.” Up until this juncture, the show’s aim was to convince…god, do I have to do this every time…the prom!’s powers-that-be to allow a gay student to participate. Our “heroes” try to reform the system from the inside, because how hard can it be? Well, as they heartbreakingly learn, the system would rather burn itself to the ground than modify itself an iota. As long as the regressives are in charge, the night belongs to them, and we’ll be positioned as the “you” in opposition to their “us” (or, to borrow a spoken line from the song that succinctly summarizes this: “SHE almost ruined it for all of US”).

BUT THE SHOW’S NOT OVER.

In Act Two, everyone learns the errors of their ways, including the error that the initial joy of “Tonight Belongs to You” ignored. Remember, its chorus assumed that tonight belonging to “you” and “us” are the same, but that’s not the case when we’re not in control. The chorus of the actual big finish, the last song, “It’s Time to Dance”, encompasses this truth:

This time, we’re the ones BUILDING…last one, I swear…the prom!, and that’s how it needs to be to ensure that we get to define we as we, and every “you” is included in our “us.” Strip away the rest of the show besides these two songs, and the listener would still be able to piece together one of the story’s PROMinent messages (got ’em!).

And that, my friends, is the function of an Act One Fake-Out Anthem.