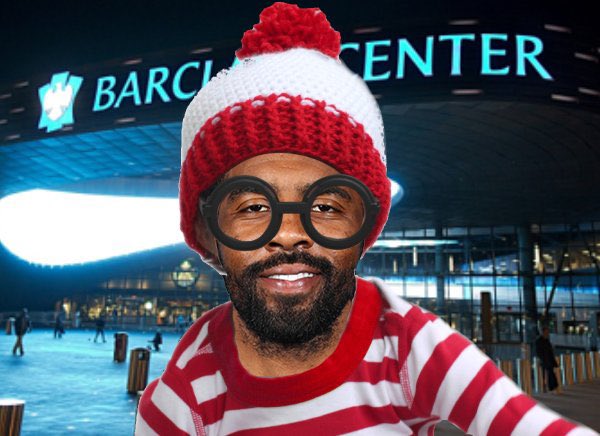 And now, an idea from the annals of “this will never fucking happen,” courtesy of the late-night meanderings of my Knicks-wary mind:

(Pedantic aside: I know this is a popular Internet-basketball-nerd formulation, but isn’t ‘whom’ grammatically correcter??).

The Wizards ain’t going anywhere with their roster. Beal’s the more valuable asset, which is why trading him would be unwise if the goal is to at the very least compete in the short-term. By compete, I don’t mean for a title, but finishing rounds away would still be a step-up for the wand-ers. 2020 Westbrook’s ceiling just isn’t as high anymore, and if Kyrie locks in again (perhaps the world’s biggest if), could he and Beal be the East’s Dame and CJ??

Not to mention, Kyrie in the nation’s political capital:

(To be honest, if his recent behavior is a lost-in-translation crusade to focus on affecting meaningful sociopolitical change, then maybe he’d be happier in D.C.?).

On the flip side, the Nets are trying to win a title right fucking now, and counting on Westbrook to be available to play, or even contactable, seems like a safer bet than whatever the heck is going on with Kyrie. At least they’d know, barring injury, Westbrook’s actually showing up and prioritizing basketball…for better and for worse. And even if Westbrook on the court = bad things for the Nets, they still have the other Big Two! Kyrie’s a match waiting to be lit (or are we already watching it ignite?), a fire that can burn the entirety of the Nets to the ground in his wake. And since the team’s long-term prospects are already no bueno, Westbrook’s contract isn’t a bigger gamble than their current all-in, right-now, future-leveraged position.

And, most importantly, THE WORLD FINALLY GETS TO WITNESS THE ALL-GROWN-UP BABY THUNDER IN ADULT ACTION!!!

And if you really wanna whet my appetite (and de-moisten Nets fans’ private parts; what’s wrong with my brain today?), let’s ship Scotty north along with Russ; we’re just an Amtrak ride away (not Acela, because c’mon, Scotty’s overpaid enough as is) from:

How Wizards fans probably feel about Scotty after all these years:

Was all this just a translucently-veiled attempt to distract myself from wallowing in the Knicks’ 4-game losing streak?

One thought on “A Big 3 Reunion (Fantasy/Nightmare)”