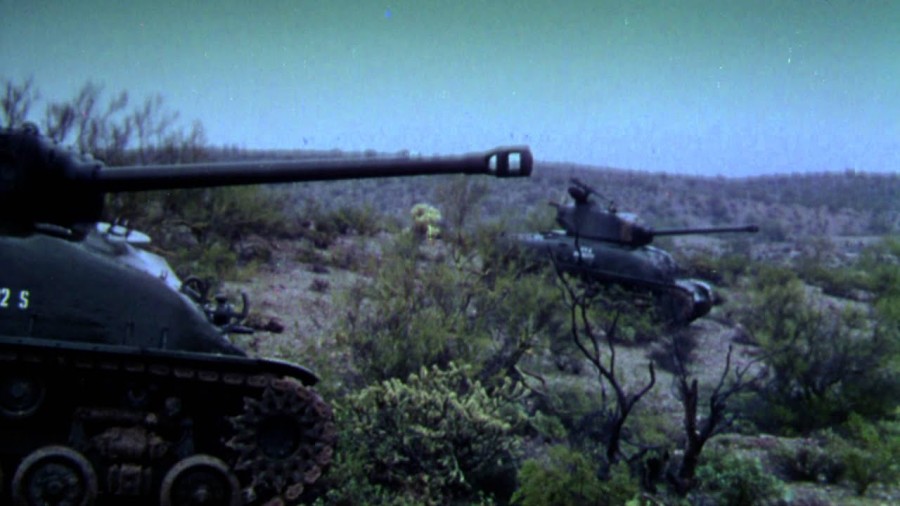 Is 1953’s big-screen version of The War of the Worlds the third most famous adaptation of H.G. Wells’ classic?

Orson Welles’ radio broadcast still reigns supreme, probably followed by Steven Spielberg and Tom Cruise’s collaboration (which chopped off the title’s preceding “the” … for no apparent reason). Contrary to its B-movie, sci-fi genre’s age-old, erroneous perception, the 1953 iteration — despite all its cornball effects and affectations — still has something to say about our science-factual world. And it does so by adding elements specific to its era that prior translations couldn’t bring into the fold. Retelling the story through this then-modern perspective ensured that the original novel could converse with the then-present to such a degree that the discussion could reach new places and take new forms.

(Other movie remakes and live-theater revivals can learn a thing or two gazillion from this approach. There’s more than one way to skin a cat delectably, and simply rolling out the same cat with differently-dyed fur — the definition of superficial! — doesn’t qualify. Sorry for the mixed metaphor, but speaking of which: “skinning a cat” is a rather violent image to convey a fairly mundane idea … luckily, the unnecessary violence of humanity is our subject today!).

Eight years prior to the movie’s release marked the end of World War Two, and the depicted uselessness of atom bombs against the aliens isn’t the War’s sole appearance herein; when showing the space invaders’ destruction of various cities around the globe, the thrifty producers circumvented footing the bill to enact this spectacle by instead opting to utilize what looks like archival footage from the 1940s and earlier. Penny-saving, yes, but a decision that bears substantive weight as well.

I mean, it’s right there in the title; a simple rephrase of “The War of the Worlds” can get you pretty close to “World Wars”.

In contradistinction to the historical record’s branding, world wars are by no means a 20th century creation. BUT, the level of damage inflicted by technology-fueled terror from the sky WAS a 20th century first. In 1897, such devastation could only be a prescient fever-dream by the endlessly-imaginative H.G. Wells. A mere 50 years later, no imagination was required to artificially fabricate the chaos and ruination of Earth under siege; any and every news outlet in the world was sitting on stock footage that would do the trick. Such travesties were once unimaginable to pull off, let alone imagine as real-world possibilities; now, they’re a permanent part of our past.

There’s a profound tragedy in that, I think.

And since the movie repeatedly states that the world’s most advanced weaponry accomplishes fuck all against the aliens — our armaments can’t even dent their armor — an air of creeping futility sets in over the proceedings. We mount crusades, investing untold resources and lives, to kill each other in the name of protecting ourselves, only to realize that all our in-fighting failed to prepare us for the actual world war ahead.

Then what the literal hell was it all for?