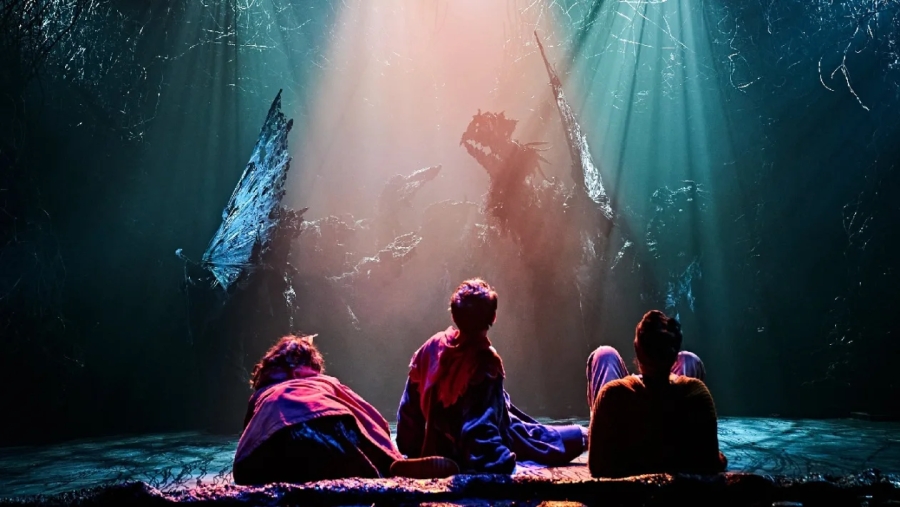 The Ocean at the End of the Lane: my favorite use of stagehands ever??

Their choreography alone would pit them in the running for the title; their interplay with the story’s themes secures them the crown.

Reflecting Neil Gaiman’s modus operandi, The Ocean at the End of the Lane odes the alchemic powers of fantastical storytelling, from a specific perspective: that of a child. There’s hidden magic in the woods of life, magic that conventional maturity — read: conformity of cognition — ultimately blinds us to.

And here’s the thing about adolescent magic: imagination can transform measly sticks and stones into the building blocks of spectacular worlds, larger-than-life planets created by nothing grander than the smallest, handmade, everyday artifacts available all around us. In the over properly active brains of the young, micro minutiae becomes such stuff as dreams are made on.

Speaking of Big Willy, this Gaimanesque sentiment harkens back to Henry V‘s canonical prologue, about how theater’s magic relies on the eye of the beholder to turn suggestive stagecraft into the teeming fullness of far-flung worlds. For both writers, it’s theme as existentialism: our sometimes-mundane corporeal reality masks the awe underneath and of our normal-seeming surfaces, which art can unearth and privy us to.

In adapting Gaiman’s novel for the theater, the National’s staging of The Ocean at the End of the Lane reshapes his ode to fantastical storytelling into an ode to the fantasy of theatrical storytelling.

Which brings us back to the stagehands.

Despite the technical bells and whistles of the production’s spectacle, it maintains a Brechtian, homegrown aesthetic; we see the strings tying the wondrous artifice together, with paltry-few attempts to obscure these artificial means of expression. There’s a pervasive air pointing to theater’s essential core: a bunch of regular humans gathering in a solitary room to elevate the ordinary into the extraordinary. In other words: let’s just put on a show!

And what better representation of this “transcendence through grassroots theatricality” sensibility than stagehands? Latter-day spectacle tends to be predicated on the motorization and mechanization of the stage; sets fly in and out, rounded into completion through digital projections. But The Ocean at the End of the Lane returns us to the ancestral roots of the form: human bodies on stage, laboring with fluid beauty to physically move us from one suggested world to to the next.

Watching The Ocean at the End of the Lane, I found myself transported to its astonishing lands of fantasy thanks to nothing more than old-fashioned stagecraft. True to the story’s themes, stagehands exist on the edges/borders/outskirts/fringes of the playing space, outside the characters’ cognizant plane of being, but still within sight for the audience to observe their surreal contributions to the proceedings. They are — to borrow a non-pejorative phrase from the material — the fleas of theater, embodying the magical machinations undergirding and ordering our lives. They’re “out of view,” but always present, with a constant influence on us.

And I can’t stop thinking about the production’s final moment, which grounds all of these high-falutin ideas into a single image of corporeal simplicity. I’ve written a lot recently about how the human body is the fundamental language of theater; can a show locate a physical arrangement to end on that conveys the complex multiplicity of life depicted throughout an evening of theater, reduced and stripped down to its barest, most elemental component parts?

The Ocean at the End of the Lane‘s technical wizardry culminates in the plainest gesture: a yawn. A woman, “alone” on stage (are we ever really alone; what if our limited faculties just can’t detect our ubiquitous company beyond the reach of our scant five senses?), digs deep into her essence, and lets out…a yawn. The breath of a thousand worlds and lives is contained in that yawn, a deceptively straightforward, normal occurrence full of more than meets the eye.

From nothing, comes everything, which means it was never nothing to begin with…