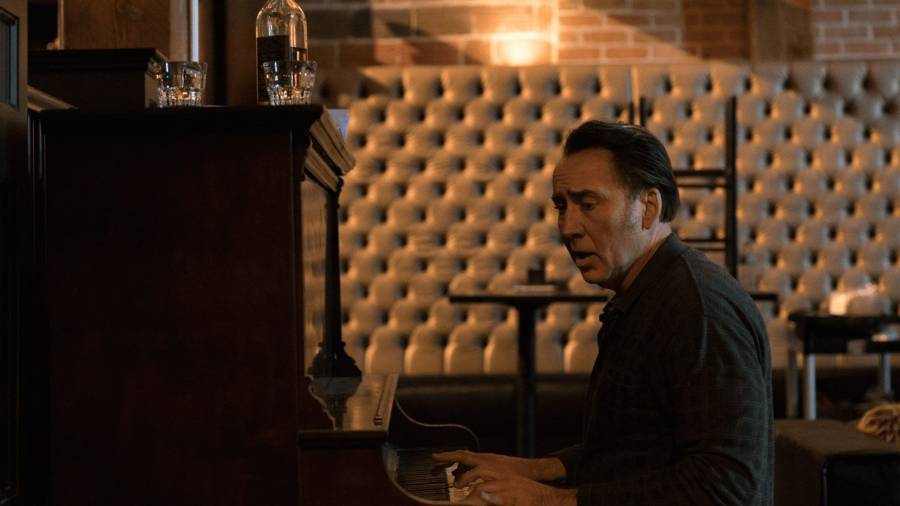 The other greatest Cage-hits in this B-movie spectacular:

–“BEEEEEEEEEEEEF!!!!!!” The Cage’s final scene is the stuff Oscars should be made of/for.

–The montage of The Cage, fresh out the cage (AKA jail), with his head dangling outside the window of a moving vehicle like an awestruck pup, marveling at the majesty of the scenery in God’s Free Green Earth, set to the cheesiest alternative-folk-pop.

–The Cage’s orgasmic imitation of a revving engine.

–The Cage jubilantly remarking how his son’s new suit REALLY brings out the blue in his eyes.

If A Score to Settle wanted to be more than a mindless B-movie, the narrative structure’s bait-and-switch relationship to violence could’ve lent itself to a deconstruction of what makes the revenge tragedy genre tic, a clock that’s been tocking since Greek antiquity (in regards to Western storytelling forms, OG may as well stand for Original Greeks). When approaching a macabre fable that promises delimbing — such as: THE CAGE SETTLING SCORES — the audience comes with a certain amount of bloodlust expected to be satiated.

Though A Score to Settle‘s protracted build-up feels like a result more of budgetary restrictions than thematic intention — hinting at action that never arrives is leagues cheaper than actually bringing the spectacle to life on screen — it could’ve been used as a vehicle to examine the nature of the aforementioned bloodlust. Imagine if, instead of being treated to hokey B-movie character development, the bulk of the duration was comprised of discursive discourse regarding the nature of vengeance, specifically both The Cage’s -and our own desire to experience it.

Keep A Score to Settle‘s knowing inclusions of slaughter-teasing cliches — the armament scene! The Cage’s periodic late-night investigations! etc! — which are basically blood in the water for us sharks in the audience, ramping up tension that never hits the fan. Or, if it did, the preceding conversations could dampen — and deepen — our response (similar to how Once Upon a Time … in Hollywood‘s prolonged set-up should make us question what we find so enjoyable about the climax. Another example: Hobbs & Shaw‘s no-gun denouement gestures (limply) at an anti-Second Amendment stance).

Maybe that’s what A Score to Settle is going for…but the B-movie tropes seem to exist only to be winked at, not commented upon in any meaningful way. It feeds our baser cinematic instincts, while also letting them off the hook. A missed opportunity, to be sure, but one that doesn’t change my steadfast dogma one iota: never miss an opportunity to let the Cage out of the Cage.