Only two complete albums appeared on 2017’s SHOOT IT STRAIGHT INTO MY FUCKING VEINS List.

(For the record, those records were HAIM’s Something To Tell You and the soundtrack to the movie Band Aid, officially titled The Dirty Dishes EP).

It’s a good sign for 2018 that only four full months in, three have already made the cut.

They aren’t necessarily my favorite albums of the year (though they happen to be three of my top four); rather, they’re the ones comprised entirely of songs I’d be thrilled to listen to again when shuffling through 2018’s SHOOT IT STRAIGHT INTO MY FUCKING VEINS playlist upon revisiting my musical past in years to come.

I normally value albums that are works of art whose individual songs add up to a whole that’s greater than the sum of its songs. But for the purposes of shooting them straight into my fucking veins, I only care about the individual songs.

Speaking of songs, a few more round out this month’s update.

One of only two 2018 albums that I’ve listened to without writing about…yet. Sufficiently delving into the seemingly endless layers of genius on display here is a daunting task, one I’m still trying to build up the courage to tackle. But my fear of climbing that unenviable mountain has no bearing on this game-changing album’s inclusion on the list; the current album of the year deserves nothing less…

For my first go-around with XXXTENTACION’s ? , its overwhelmingly-indiscriminate (in a good way) formal and informal experimentation blinded me to the merits of any one song; the fascinatingly disparate and dissonant tracks made me think each would only work in conversation with the rest. It was only after my girlfriend kept shooting this song into her veins that I realized its distinct charms.

The producing, specifically the beat, is way more interesting than the original. Plus, the lyrics allow Eliza to become a stronger character with more agency, an improvement over her more muted, borderline vanilla persona in the show proper.

If music videos could win Pulitzers — a reality we thankfully might not be that far away from given Kendrick Lamar’s win this year — here’s your early favorite for 2018. We’ll never know how the song would hold up without the accompanying imagery…but I have a feeling the single alone wouldn’t contend for this currently-fictitious Pulitzer. Then again, that’s almost the point: Donald Glover/Childish Gambino knows that America tends to be more taken with eye-catching imagery than the meaning imparted through boring old words.

Along those lines, can we just take a moment to appreciate the single’s artwork: 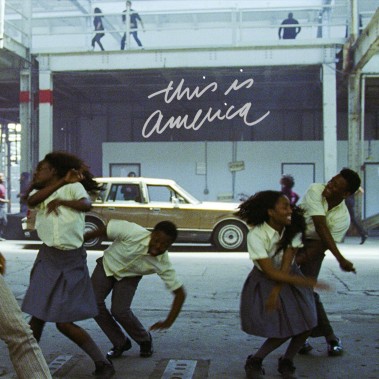 Are the kids convulsing from joyful dancing or painful violence? The interconnected dichotomy of that question is one of the many theme’s in this endlessly-rich song.